The "false positives" scandal (Escándalo de los falsos positivos in Spanish) was a series of murders in Colombia, part of the ongoing armed conflict in that country between the government and guerrilla forces of the FARC and the ELN. Members of the military had poor or mentally impaired civilians lured to remote parts of the country with offers of work, killed them, and presented them to authorities as guerrilleros killed in battle, in an effort to inflate body counts and receive promotions or other benefits.[1]

As of June 2012, a total of 3,350 such cases have been investigated in all parts of the country and verdicts have been reached in 170 cases. Human rights groups have charged that the judicial cases progressed too slowly.[1]

The name of the scandal refers to the technical term of "false positive" which describes a test falsely detecting a condition that is not present. 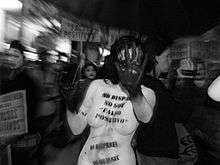 The scandal broke in 2008, when 22 men from Soacha who had been recruited for work were found dead several hundreds of miles away. A recruiter later testified that he had received $500 from the Colombian military for each man he recruited and delivered to them.[2] In June 2012, six members of the army were sentenced to long prison sentences in that case.[1]

Accusations of similar cases had occurred much earlier. A recently declassified 1990 cable by U.S. Ambassador Thomas McNamara reported on a case involving nine men who were killed by the military, dressed in military fatigues and presented as guerrilleros. Similar extrajudicial executions have been reported throughout the 1990s.[4]

In 2011, a colonel of the Colombian army received a sentence of 21 years in prison for his admitted involvement in the killing of two peasants who were then presented as guerrilleros. He also admitted that his unit had carried out 57 similar operations.[5]

Both Defense Minister Santos and President Uribe have claimed that there were cases of false denunciations where legitimate killings were presented as "false positives" to stain the name of the military and undermine military morale.[6]

In June 2009, UN special rapporteur Philip Alston carried out an investigation of extrajudicial executions in Colombia. He reported:[7]

The International Federation for Human Rights produced a report on the phenomenon in May 2012, alleging over 3,000 civilian victims between 2002 and 2008. The group asked the Prosecutor of the International Criminal Court prosecutor to open an investigation, as "those who bear the greatest responsibility for these crimes are not being investigated or prosecuted in Colombia."[8]

Former defense minister Santos was elected President of Colombia in 2010; in 2012 he backed legislation that has been criticized by human rights groups because they fear it could potentially revert the "false positive" cases to military courts.[1]

The text of a 2013 law which regulated and implemented the previous 2012 reform includes extrajudicial executions among a list of crimes which will continue to remain under civilian court jurisdiction and will not be submitted to military courts. Critics have expressed their concern that the defense lawyers of military personnel being processed for false positive cases may argue that their crimes are not extrajudicial executions (which were previously not defined as a crime in the Colombian penal code) but homicides, as a way to avoid the jurisdiction of civilian courts and request a transfer to military courts. Legislators who supported the bill have argued that another paragraph in the law expressly indicates that cases of false positives currently in civilian justice cannot be transferred to the military justice system.[9]

This article is issued from Wikipedia - version of the 5/25/2014. The text is available under the Creative Commons Attribution/Share Alike but additional terms may apply for the media files.