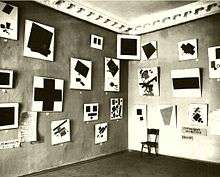 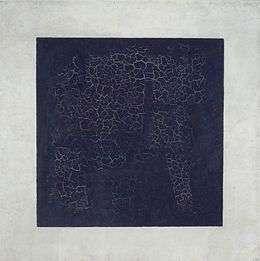 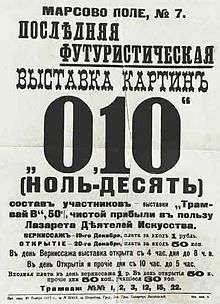 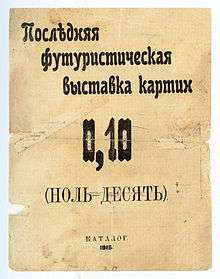 Cover of the Catalog

Rozanova, Boguslavskaya and Malevich on the exhibition

The Last Futurist Exhibition of Paintings 0,10 was presented by the Dobychina Art Bureau at Marsovo Pole, Petrograd, from 19 December 1915 to 17 January 1916.[2] The exhibition inaugurated a form of non-objective art called Suprematism, introducing a daring visual vernacular composed of geometric forms of varying colour. This sort of geometric abstraction was distinct in the apparent kinetic motion and angular shapes of its elements.

The mysterious number 0,10 refers to a figure of thought: Zero, because it was expected that after the destruction of the old world, zero could begin again, and ten, because ten artists were originally scheduled to participate. In fact, there were fourteen artists who had participated in the exhibition.[3]