The 4th/7th Royal Dragoon Guards was a cavalry regiment of the British Army formed in 1922. It served in the Second World War. However following the reduction of forces at the end of the Cold War and proposals contained in the Options for Change paper, the regiment was amalgamated with the 5th Royal Inniskilling Dragoon Guards, to form the new Royal Dragoon Guards in 1992. 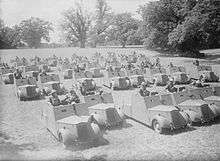 The regiment was formed in India, as the 4th/7th Dragoon Guards, in 1922 by the amalgamation of the 4th Royal Irish Dragoon Guards and 7th Dragoon Guards (Princess Royal's); it gained the distinction Royal in 1935.[1] The regiment returned to the United Kingdom in 1929, was mechanised in 1938, and transferred to the Royal Armoured Corps in 1939 prior to the outbreak of the Second World War.[2] 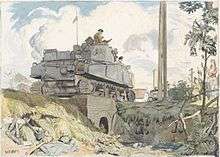 In 1939, equipped with Vickers Mk.VI light tanks, it deployed to France with the British Expeditionary Force (BEF), as the reconnaissance regiment of the 2nd Infantry Division under I Corps. It participated in the Battle of France, fighting in northern France and Belgium, and evacuated from Dunkirk in Operation Dynamo. The personnel of the regiment landed in England on 3 June 1940, having abandoned their vehicles.[2]

Under command of the 8th Armoured Brigade, the regiment landed on King Green, Gold Beach, at 07:20 on 6 June 1944 as part of the D-Day landings, supporting the 50th (Northumbrian) Infantry Division. The regiment later participated in the Battle for the Falaise Gap, and as part of the armoured forces in Operation Market Garden - the regiment pushing as far as Driel, on the south bank of the Rhine a couple of miles from Arnhem.[2] Among other notable achievements, it was the first armoured unit to cross the Seine.[2]

The regiment ended the war in Bremerhaven, and a year later was deployed to Palestine for a tour of duty lasting from 1946-1948.[2] The regiment was then deployed to Libya in June 1948, rotated back to England in November 1952, and then to Lumsden Barracks in Fallingbostel in June 1954 as part of 7th Armoured Division.[3] The regiment returned to England in October 1959 and then went to York Barracks in Munster in August 1962 from where it deployed a squadron to Aden in August 1965.[3] It was posted to Lisanelly Barracks in Omagh in September 1966 from where it sent a squadron to Cyprus in December 1967.[3] It was sent to Athlone Barracks in Sennelager in March 1969, and after returning to the UK in June 1973, went back to Lumsden Barracks in Fallingbostel in October 1976.[3] It returned to the UK again in March 1981 and was then posted to Hobart Barracks in Detmold in April 1983.[3]

Following the reduction of forces at the end of the Cold War and proposals contained in the Options for Change paper, the regiment was amalgamated with the 5th Royal Inniskilling Dragoon Guards, to form the new Royal Dragoon Guards in 1992.[1]