The 4th Marine Expeditionary Brigade was a brigade-sized unit of the United States Marine Corps that was designed specifically to be an anti-terrorism unit. The mission of this unit was to be a quickly deployable unit to wherever needed in the world so they could fight terrorism and deter, detect and defend from terrorist groups both domestically and internationally. The unit became operational on 29 October 2001,[1] and was deactivated in February 2006.

The reason a MEB exists is that they are large enough to support themselves without needing help from local infrastructure. They are also small enough to transport easily, especially in amphibious mechanized landing craft. The 4th MEB was specifically trained to find and stop terrorist plots so civilians and other active military personnel stay safe. There are different types of the MEBs, and not all are anti-terrorism like the 4th Marine Expeditionary Brigade. The MEBs are designed so no matter what mission comes up there is always a force that can handle that specific situation effectively.[1]

Following World War I the brigade was deactivated until just before the commitment to the war in Vietnam in 1964, when it was activated as the 4th Marine Amphibious Brigade. The brigade didn’t go to Vietnam though; it went to the east coast and Caribbean for counter insurgency exercises.[1] On the east coast it participated in the intervention in the Dominican Republic in 1965. In the 1970s, the 4th MAB's task changed from counter-terrorism to defending NATO's north flank against the Soviet Union. It was designated to reinforce Norwegian airfields and support a naval campaign to protect Norway.[1] The next major operation for the 4th Marine Amphibious Brigade was going to the Middle East for operation Desert Shield and Desert Storm in the 1990s. The main mission performed by the 4th MAB was Operation Eastern Exit during which the brigade rescued the Soviet ambassador, the U.S. ambassador, and 300 other dignitaries from Mogadishu, Somalia.[3][4]

After a period of deactivation, the 4th Brigade was reactivated as the 4th Marine Expeditionary Brigade (Anti-Terrorism) on 29 October 2001 at ceremonies held at Camp Lejeune, North Carolina [3][4][5] to combat domestic and international terrorism.[6] 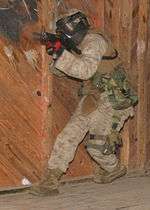 Room-to-room house clearing techniques are a part of the training simulated at Combat Town, Camp Lejeune in 2005.

The organization of the 4th MEB was a unit designed to work independently, but also trained to work with other Marine units. This unit was organized with a couple of other units like the Chemical, Biological Incident Response Force (CBIRF). Being paired with this and many other units like security force battalion broadened the range of response circumstances that the 4th MEB could respond to. With all of the assets the 4th MEB had, it makde them very deadly and able to perform the job extremely well. When a mission came up the MEB team could be paired with almost any other unit in the Marines like aviation and ground forces so the mission would have a greater chance of success.[1] The way the Marine Corps set up their forces like the MEB is having them be part of larger task forces. The category that MEB falls into is Marine air-ground task force (MAGTF) which means they operate both in the air and on the ground. This MAGTF is then subdivided with the Marine Expeditionary Forces (MEF) being the largest of the three subdivisions. The medium-sized one being the Marine Expeditionary Brigade and the smallest is the Marine Expeditionary Unit (MEU). This makes the Marine Expeditionary Force a good size, with about 4,800 marine and sailors, because it is large enough to sustain itself for long periods of time but can also send smaller units on patrol.[1][7]

The 4th MEB Marines went through extensive training to become part of the anti-terrorism team. The main goal of their training was to learn urban combat tactics. An example was when the team went through BUST, which is Basic Urban Skills Training. The goal of this course is to better train soldiers to be safer when they're in urban environments and perform breaching and other tactics used in urban combat. This training helped the anti-terrorism group become better at eliminating their targets so there were fewer terrorism threats.[8] They also go through normal marine boot camp like all soldiers in the Marine Corps must go through. Also, they must train with other units they are paired with like Chemical, Biological Incident Response Force.[2] They do this so if need arises they are prepared for whatever circumstances could arise. This is extremely important to do because if the units aren’t trained together and they are needed in a time of war the mission could go badly and there would be a larger chance for loss of life.[6]

On 26 July 2002, the 4th MEB became the first regular military unit to ever receive the Department of State Group Superior Honor Award for the hard work and dedication of its Marines and sailors during Operation Enduring Freedom. The award recognized Company L, 4th MEB (AT) for outstanding service while stationed at the American Embassy in Kabul, Afghanistan.[9]