World AIDS Day, designated on 1 December every year since 1988,[1] is dedicated to raising awareness of the AIDS pandemic caused by the spread of HIV infection, and mourning those who have died of the disease. Government and health officials, non-governmental organizations and individuals around the world observe the day, often with education on AIDS prevention and control.

World AIDS Day is one of the eight official global public health campaigns marked by the World Health Organization (WHO), along with World Health Day, World Blood Donor Day, World Immunization Week, World Tuberculosis Day, World No Tobacco Day, World Malaria Day and World Hepatitis Day.[2] Since 1995, the President of the United States has made an official proclamation on World AIDS Day.

As of 2013, AIDS has killed more than 36 million people worldwide (1981–2012), and an estimated 35.3 million people are living with HIV,[3] making it one of the most important global public health issues in recorded history. Despite recent improved access to antiretroviral treatment in many regions of the world, the AIDS epidemic claims an estimated 2 million lives each year, of which about 270,000 are children.[4] 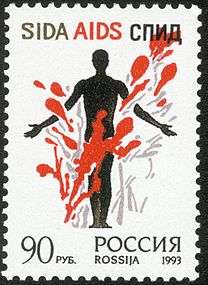 World AIDS Day was first conceived in August 1987 by James W. Bunn and Thomas Netter, two public information officers for the Global Programme on AIDS at the World Health Organization in Geneva, Switzerland.[5][6] Bunn and Netter took their idea to Dr. Jonathan Mann, Director of the Global Programme on AIDS (now known as UNAIDS). Dr. Mann liked the concept, approved it, and agreed with the recommendation that the first observance of World AIDS Day should be on 1 December 1988.[7] Bunn, a former television broadcast journalist from San Francisco, had recommended the date of 1 December that believing it would maximize coverage of World AIDS Day by western news media, sufficiently long following the US elections but before the Christmas holidays.[7]

In its first two years, the theme of World AIDS Day focused on children and young people. While the choice of this theme was criticized at the time by some for ignoring the fact that people of all ages may become infected with HIV, the theme helped alleviate some of the stigma surrounding the disease and boost recognition of the problem as a family disease.[8]

In 2016, a collection of HIV and AIDS related NGOs (including Panagea Global AIDS and The AIDS and Rights Alliance for Southern Africa started a campaign to rename World AIDS Day to World HIV Day. They claim the change will put the emphasis on social justice issues, and the advancement of treatments like PrEP.[17]

In the US, the White House began marking World AIDS Day with the iconic display of a 28-foot AIDS Ribbon on the building's North Portico in 2007.[18] The display, now an annual tradition, quickly garnered attention, as it was the first banner, sign or symbol to prominently hang from the White House since the Abraham Lincoln administration.

US presidential proclamations of World AIDS Day are issued annually since 1995.[19][20]

All the World AIDS Day campaigns focus on a specific theme, chosen following consultations with UNAIDS, WHO and a large number of grassroots, national and international agencies involved in the prevention and treatment of HIV/AIDS. As of 2008, each year's theme is chosen by the Global Steering Committee of the World AIDS Campaign (WAC).[8]

For each World AIDS Day from 2005 through 2010, the theme was "Stop AIDS. Keep the Promise", designed to encourage political leaders to keep their commitment to achieve universal access to HIV/AIDS prevention, treatment, care and support by the year 2010.[8]

As of 2012, the multi-year theme for World AIDS Day is "Getting to Zero: Zero new HIV infections. Zero deaths from AIDS-related illness. Zero discrimination."[21] The US Federal theme for the year 2014 is "Focus, Partner, Achieve: An AIDS-Free Generation".[22]

The themes are not limited to a single day but are used year-round in international efforts to highlight HIV/AIDS awareness within the context of other major global events including the G8 Summit, as well as local campaigns like the Student Stop AIDS Campaign in the UK. 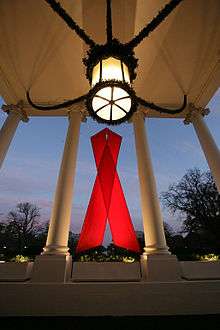 A large red ribbon hangs between columns in the north portico of the White House for World AIDS Day, 30 November 2007 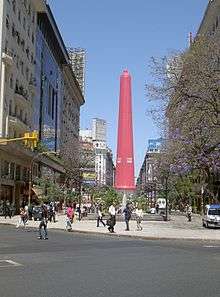 A 67 m long "condom" on the Obelisk of Buenos Aires, Argentina, part of an awareness campaign for the 2005 World AIDS Day

Different governments and organizations have declared different months as AIDS Awareness Month. The most popular choices are October and December. December is chosen to coincide with World AIDS Day.