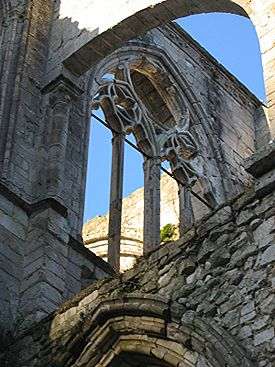 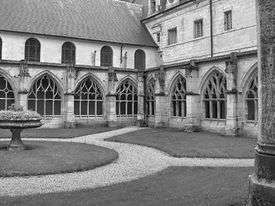 Fontenelle Abbey or the Abbey of St Wandrille is a Benedictine monastery in the commune of Saint-Wandrille-Rançon near Caudebec-en-Caux in Seine-Maritime, Normandy, France.

It was founded by Wandregisel or Saint Wandrille (died 668) on land obtained through the influence of Wandregisel's friend Saint Ouen, Archbishop of Rouen. Wandrille held a high position at the court of his king, Dagobert I, but wishing to devote his life to God, he retired to the abbey of Montfaucon-d'Argonne, in Champagne, in 629. Later he went to Bobbio Abbey and then to Romainmôtier Abbey, where he remained for ten years. In 648 he returned to Normandy and established the monastery of Fontenelle, using the Rule of Saint Columbanus, which he had known at Bobbio; the deed of gift of the land is dated 1 March 649.

He first built a Carolingian style basilica dedicated to Saint Peter, nearly three hundred feet long, which was consecrated by Saint Ouen in 657. (This church was destroyed by fire in 756 and rebuilt by Abbot Ansegisus (823–33), who added a narthex and tower).

The monastery was extremely successful at first, and produced many saints and prelates. In 740 however there began a series of lay abbots, under whom the monastery declined. Ansegisus, the reformer of Luxeuil Abbey, was appointed in 823 abbot of Fontenelle, which he also reformed.

The abbey soon became a target for Viking raids, culminating in that of 9 January 852 when it was burnt down and the monks fled with the relics of Saint Wandrille.

After more than a century in temporary accommodation at Chartres, Boulogne, Saint-Omer and Ghent, the community was at length brought back to Fontenelle by Abbot Maynard in 966 and a restoration of the buildings was again undertaken. A new church was built by Abbot Gérard, but was hardly finished when it was destroyed by lightning in 1012. Undaunted by this disaster the monks once more set to work and another church was consecrated in 1033. Two centuries later, in 1250, this was burnt to the ground, but Abbot Pierre Mauviel at once began a new one. The work was hampered by lack of funds and it was not until 1331 that the building was finished.

Meanwhile, the monastery attained a position of great importance and celebrity for the fervour and learning of its monks, who during the periods of its greatest prosperity numbered over three hundred. It was especially noted for its library and school, where letters, the fine arts, the sciences, and above all calligraphy, were cultivated.

One of the most notable of its early copyists was Saint Harduin (Haduin), a celebrated mathematician (died 811) who wrote with his own hand four copies of the Gospels, one of Saint Paul's Epistles, a psalter, three sacramentaries, and many other volumes of homilies and lives of the saints, besides numerous mathematical works. The "Capitularies of the kings of the Franks" were compiled under Abbot Ansegisus in the 8th century. The monks of Fontenelle enjoyed many rights and privileges, among which were exemption from all river-tolls on the Seine, and the right to exact taxes in the town of Caudebec. The charter dated 1319 in which were enumerated their chief privileges, was confirmed by Henry V of England and Normandy in 1420, and by the Council of Basle in 1436.

Some of the burials at the Abbey are

Commendatory abbots were introduced at Fontenelle in the 16th century and as a result the prosperity of the abbey began to decline. In 1631 the central tower of the church suddenly fell, ruining all the adjacent parts, but fortunately without injuring the beautiful cloisters or the conventual buildings.

It was just at this time that the newly formed Congregation of St-Maur was reviving the monasticism of France, and the commendatory abbot Ferdinand de Neufville invited them to take over the abbey and do for it what he himself was unable to accomplish. They accepted the offer, and in 1636 began major building works. Not only did they restore the damaged portion of the church, but they added new wings and gateways and also built a great chapter-hall for the meetings of the general chapter of the Maurist congregation. They gave the abbey new life, which lasted for the next hundred and fifty years.

During the French Revolution in 1791 Fontenelle was suppressed, and in the following year the property was sold by auction. The church was partially demolished, but the rest of the buildings served for some time as a factory and later passed into the possession of the de Stacpoole family, to be turned to domestic uses.

George Stanislaus, 3rd Duke de Stacpoole, who had become a priest and a domestic prelate of the pope, and who lived at Fontenelle until his death in 1896, restored the entire property to the French Benedictines (Solesmes congregation), and a colony of monks from Ligugé Abbey settled there in 1893, under Dom Joseph Pothier as superior. Dom Pothier, a scholar who reconstituted the Gregorian chant and one of the most well-known Benedictines of the world, later was elected abbot of Saint-Wandrille, becoming upon his installation on 24 July 1898 its first abbot since the French Revolution and its first regular abbot since the 16th century.

This community was expelled under the "Association Laws" by the French government in 1901, and spent years in Belgium until they were able to return on 26 January 1931, where they have remained until the present.

From 1907 until 1914, the abbey was rented by the Belgian writer Maurice Maeterlinck, who lived there during the warmer months of the year with his lover, Georgette Leblanc. During the official visit of the British royal family to France, Queen Mary visited the monastery on 12 July 1917. 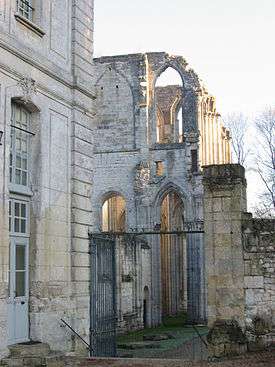 Besides the chief basilica Saint Wandrille built seven other churches or oratories both inside and outside the monastic enclosure. All of these have either perished in the course of time, or been replaced by others of later date, except for the chapel of St Saturnin, which stands on the hillside overlooking the abbey. It is one of the most ancient ecclesiastical buildings now existing and, though restored from time to time, is still substantially the original construction of Saint Wandrille. It is cruciform, with a central tower and eastern apse, and is a unique example of a 7th-century chapel.

The parish church of the village of Saint-Wandrille-Rançon also dates from the saint's time, but it has been so altered and restored that little of the original structure remains.

The buildings were damaged by bombing in 1944. A new abbey church was consecrated on 12 September 1970.

Fontenelle has produced an unusually large number of saints and the blessed. The calendar of the present monastery records thirty, from the founders Saints Wandrille and Gond to Blessed Louis Lebrun, martyred in 1794 during the Revolution. All have their own feast days, but 1 March (also the date of the foundation) is the feast of all the saints of Fontenelle.

The present abbot, Dom Nault (succeeding to Dom Pierre Massein in 2009), is the 82nd in line from Saint Wandrille to hold the position.