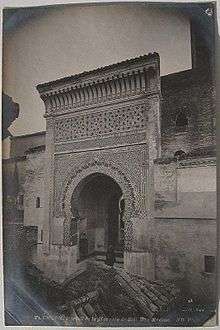 Visiting the tomb of Sidi Boumediène in El Eubbad district, in Tlemcen, Algeria, on day of Mawlid.

Some even refer to him as the national figure of Maghreb mysticism as he was such a forerunner of Sufism in this geographical area. Devoted to the fervent service of God, he helped introduce looking into oneself and harmonizing internal occurrences with the external observances through asceticism.[1]

Abu Madyan was born in Cantillana (Arabic: قطنيانة‎‎), a small town about 35 km away from Seville, in 1126. He came from an obscure family and his parents were poor. As he grew up, he learned the trade of a weaver as it was a popular practice at the time. His insatiable hunger for knowledge, however, piqued his interest in the Qur'an and the study of religion and mysticism.

Soon after, Abu Madyan traveled to Fes to complete his education. He left for Fes at about the end of the Almoravid era or at the beginning of the founding of the Almohad state.[2] There, he studied under Abu Ya’azza al-Hazmiri, ‘Ali Hirzihim, and al-Dakkak. It was al-Dakkak that provided him with the khirka, the cloak passed from Master to student in the study of Sufism. During his time studying in Fes, Madyan became entrenched within the readings of Al-Ghazali, who was one of the most prominent, if not the most prominent theologian, philosopher, and mystic of Sunni Islam and was even regarded as one of the renewers of the religion.

Abu Madyan was particularly fascinated with mysticism by Sidi Ali Ibn Harazem. They fasted and prayer together in a continuous fashion as the ideal Sufi, practicing very strict asceticism. Abu Madyan, who'd come from a poor background, didn't have a hard time distancing himself from such pleasures. Because of his strict practices, he reaches the rank of Kutb and Ghuth. Abu Madyan went to Mecca where he met the great Muslim saint, Jilani, and completed his mystic studies under him.On his return,he went to the town of Béjaïa where he practiced very strict asceticism and acquired an honorable reputation for his knowledge. People would come far to both listen to his public lectures and consult him on certain manners. People believed he could even perform miracles.

His beliefs were in opposition to the Almohade doctors of that town. The Almohades were disturbed at his increasing reputation and wanted to get rid of him.

Eventually, Madyan settled in the town of Béjaïa where he established a mosque-school (zawiya). The sheer amount of fame and influence that Abu Madyan evoked raised serious concern from the political powers of the time. The Almohad Caliph Ya’qub al-Mansur summoned Madyan to Marrakech for this reason so he could talk to Madyan himself. Upon his summoning to Marrakech, Abu Madyan was taken ill and died before he reached his destination in 594/1198, near the river of Ysser (يسر).[3] His last sigh was supposedly "Allah al-Hakk." He was buried in al-‘Ubbad near Tlemcen, Algeria. His funeral was widely commemorated by the people of Tlemcen and he has been considered the patron saint and protector of Tlemcen ever since. A mausoleum was built by the order of the Almohade sovereign, Muhammad al-Nasir, too shortly after his death. Many princes and kings of Tlemcen have contributed to this mausoleum since his demise. Many monuments, a good number of them still well preserved, were built in his honor next to his tomb by the Marinid kings, who controlled Tlemcen in the 14th century. One such monument is the Mosque of Madrasa. His tomb became the center of fine architecture and is still a place of pilgrimage for many Sufis today.[2]

The basic principles and virtues taught at Madyan’s school in Bejaia were repentance (tawba), asceticism (zuhd), paying visits to other masters, and service to experienced masters. He emphasized futuwa (youth/chivalry) but only when accompanied by the obedience of devotees to their master, the avoidance of disagreements between devotees, justice, constancy, nobility of mind, the denunciation of the unjust, and a feeling of satisfaction with the gifts of God. Because of his focus on the acceptance of one’s emotions, Madyan and his followers refused to confine themselves to only asceticism and meditation alone, but instead lived day to day by maintaining close relationships with the people around them. Along with sharing his knowledge and ideas with his disciples, Abu Madyan wrote many poems and spoke in proverbs in order to connect with the masses and not just the intellectuals.[1]

According to Yahya B. Khaldun, Abu Madyan's teachings may all be summed up in this verse which he often repeated, "Say Allah! and abandon all that is matter, or is connected with it, if though desirest to attain the truth goal."[2]

Aside from attaining Ghawth status and teaching hundreds and hundreds of disciples, Abu Madyan left his mark in more ways than one. He gained immense popularity because he was relatable, despite his high scholarly status. He had a personality and way of speaking that united people from all walks of life, from the common people to the academics. Even to this day, scholars say that no one of the time surpassed him in religious and intellectual influence. His school produced hundreds of saints and out of the 46 Sufi saints in the Rif region, 15 were his disciples. People still visit his tomb today for asking god through him they call it tawasoul , they visit him from all around the world.

There are very few surviving writings from Abu Madyan, and of those that do still exist, there are mystical poems, a testament (wasiyya) and a creed (akida). He encouraged the free expression of emotions rather than rigidity, but also made known his support of asceticism complete devotion to God and a minimalist lifestyle.