The Afghanistan National Football Team popularly known as the "Afghan Lions", [1][2][3] is the national football team of Afghanistan and is controlled by the Afghanistan Football Federation. Founded in 1933, and played their first international game against India in Kabul, 1941. Afghanistan then joined FIFA in 1948 and the AFC in 1954, as one of the founding members. They play their home games at the Ghazi National Olympic Stadium in Kabul, the capital of Afghanistan. In 2013, Afghanistan won the 2013 SAFF Championship. Afghanistan also earned the "FIFA Fair Play Award" in 2013.

Teens playing football inside the Ghazi Stadium, built during the 1920s under King Amanullah Khan.

Formed in 1933 and affiliated to FIFA since 1948, the Afghanistan Football Federation was one of the founding members of Asian Football Confederation in 1954.[4] The first football club established in the country, Mahmoudiyeh F.C., was founded in 1934. Three years later the team traveled to India and took part in 18 games of which they won 8, lost 9 and drew 1. The second football club founded was Ariana Kabul F.C. which was established in 1941. This team traveled to Tehran, Iran upon invitation, played 3 games, winning one game and losing two. 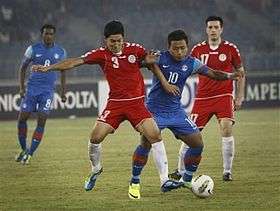 Following the demise of the Taliban regime, the Afghan national team eventually returned to the international arena in 2002, when they played South Korea in the Asian Games, losing 2–0.[5] Afghanistan participated in their first international tournament in the 2003 SAFF Gold Cup where they lost all three group stage matches to India, Pakistan and Sri Lanka. Later in the same year, Afghanistan took part in the 2004 AFC Asian Cup qualification where they won against Kyrgyzstan but lost to Nepal and failed to make it to the next round. Afghanistan started its FIFA World Cup campaign for the first time in 2003 where they played Turkmenistan in 2006 FIFA World Cup qualification. They lost both matches in aggregate of 13–0. This was first time Afghanistan participated in FIFA World Cup qualification though they had been affiliated since 1948. The team went to Pakistan to take part in the 2005 South Asian Football Federation Gold Cup, which they lost to the Maldives.

Afghanistan competed in their third World Cup qualifying campaign playing the first leg of their first match against Palestine in Tajikistan due to security reasons, which they lost, and the second leg of the match in Palestine which they drew with Balal Arezou scoring, meaning they failed to advance to the second round and were eliminated.

In 2011 SAFF Championship Afghanistan defeated Bhutan 8–1, the biggest victory in the history of the Afghanistan football team. In this match, Balal Arezou scored the only Hat-trick of the competition with 4 goals and the team scored the quickest goal of the tournament through Ata Yamrali in the third minute. It was Afghanistan's first Semi Final. In the Semi-Final of the tournament, the Afghans faced Nepal whom they beat 1–0 in Extra time with the only goal scored by Balal Arezou in the 101st minute. It was the first win of Afghanistan over Nepal. In the final, Afghanistan played India to whom they lost 4–0.

Afghanistan defeated Bhutan 5–0 in 2012 AFC Challenge Cup Qualification. In the first leg, they beat Bhutan 3–0 with Sidiq Walizada scoring all 3 goals and 2–0 in the second leg. In the second qualification round, Afghanistan lost to Nepal and North Korea, whilst beating Sri Lanka but failed to qualify for the next stage. On 20 August 2013 before the 2013 SAFF Championship Afghanistan played Pakistan in a FIFA approved friendly for the first time in 36 years. This was also the first time on home ground after a decade which ended with a 3–0 victory over Pakistan.[7][8]

Sharityar in red shirt fighting against the ball with Sunil Chhetri during the 2011 SAFF Championship in India.

In the 2014 AFC Challenge Cup, Afghanistan did well to reach the Semi-final, losing to the eventual champions Palestine, 2–0. They finished their campaign in fourth spot, the countries highest finishing place in the short term the cup has existed, losing to Maldives on a penalty shoot out: (7–8) after a 1–1 draw for third spot of the competition. On 10 June 2014 Afghanistan Football Federation moved from South Asian Football Federation SAFF to the CAFF. At the 2014 Ballon D'or ceremony, the Afghanistan Football Federation won the FIFA Fair Play Award. Afghanistan was honored with the award for the outstanding performance of the Afghanistan football during the year, despite the chaos of war and difficult political situations the country is facing. FIFA made a statement and posted on its website that "Following a year of remarkable achievement in grassroots level football, building infrastructure to further develop football throughout the country and nurturing a professional league despite enduring over a decade of disorder stemming from war, Afghanistan has been presented the 2013 FIFA Fair Play Award."

On 9 February 2015, it was confirmed that the AFF signed a new coach for the national team. German-Bosnian trainer Slaven Skeledzic, signed a 1-year contract with the AFF. The new trainer had earlier coached the under 17 and under 19 teams in Germany. Skeledzic played football in Germany and coached youth teams in the Bundesliga.[10] On 27 April 2015 the AFF signed a contract with a new sponsor called Alokozay Group of Companies. In October 2015 the AFF forced Skeledzic to resign from his position, after the 5–2 defeat against Syria. In November 2015, the Afghan National Team announced that Petar Segrt was appointed as the new head coach. After some problems and disagreements with the AFF Segrt made the decision to quit as the headcoach of the national team. This was just after his 1-year anniversary with the national team.

The Afghanistan national team has received several nicknames by supporters and media. The most common one used to refer the team is Afghan Lions. Many Afghans also prefer the nickname the Lions of Afghanistan. They are also called Melli Poshan or the Team Melli.

In 2002, the Japanese sports brand Asics was the sponsor for the Afghan Football Team till 2004. In the year 2005, the German sports brand Adidas was the sponsor of the national team till 2008. In 2009 the Danish sports brand Hummel equipped the national team.[11] In 2011 the Afghanistan Football Federation had signed a 4-year contract with Hummel, to provide both the Men's and the Women's National Team for all of the sportswear from 2011 till 2015. On 6 March 2015, the Afghan Football Federation signed a new 4-year contract with Hummel till 2019. Hummel released in 2016 the new kits for Afghanistan. It included an integrated hijab for the female Afghanistan footballers to play with while being covered from head to toe.[12] 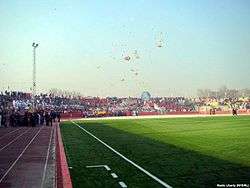 The Ghazi Stadium in Kabul, which is now referred to as the Afghan Football Federation Stadium.

Major football matches in Afghanistan are held at the Afghan Football Federation Stadium (popularly known as the Ghazi Stadium) in Kabul. Built during the reign of King Amanullah Khan in 1923, the stadium has a capacity of around 25,000 people.[15] The first international football match hosted there was played between Iran and Afghanistan in 1941 and ended as a draw, 0–0. Their 2006 FIFA World Cup qualification second leg match was played at the Ghazi Stadium against Turkmenistan which Afghanistan lost 2–0, having previously lost the first leg 11–0. The stadium is maintained and controlled by Afghanistan Football Federation. The Afghan Premier League and other local football tournaments take place in the stadium.[16]

The following are Afghanistan's results and fixtures as of: 30 November 2016

The following players have also been called up to the Afghanistan squad within the last 12 months.