Components of aggregate expenditure (AE) – defined as the total amount that firms and households plan to spend on goods and services at each level of income. Also, it can be seen that the aggregate expenditure is the sum of expenditures on consumption, investment, government expenses and net exports. It is normally derived from all the components of the aggregate demand. Aggregate demand (AD) refers to the sum total of goods that are demanded in an economy over a period and thus AD is defined by the planned total expenditure in an economy for a given price level.

Various schools of thoughts use various components to come up with the Aggregate Expenditure. The major school of economic thoughts which are the classical and Keynesian economists use the following components:

The Keynesian model propagates an active state to control and regulate the economy. The government can make expenditure in terms of infrastructure, thus increase the total expenditure in the economy as advocated by Keynes. Transfer payments (such as pensions and unemployment benefits) are NOT included in G as that would mean a double count.

In an open economy, the total expenditure of the economy also includes the components of the net exports which is the total exports minus the total imports.[4]

Classical economists relied on the Say's law which states that supply creates its own demand, which stemmed from the belief that wages,prices and interest rates are all flexible.[5] This comes from the classical thought that the factor payments which are made to the various factors of production during the production process, would create enough income in the economy to create a demand for the products produced. 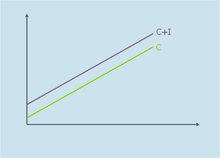 This supports the classical thought which revolves around Adam Smith's invisible hand which states that the markets would achieve equilibrium via the market forces that impact economic activity and thus there is no need for government intervention. Moreover, the classical economists believed that the economy was operating at a full employment Hence the classical Aggregate expenditure model is:[6]

Keynesian economics believes, contrary to the classical thought that the wages, prices and interest rates are not flexible and hence violating Say's law, which provided the foundation for the maxim that "supply creates its own demand". Keynes believed that the economy was subject to sticky prices and thus the economy was not in a state of perpetual equilibrium and also operated at an under-employment equilibrium. 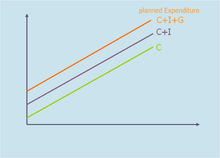 Keynesian economics preaches that in times of a recession, the government must undertake the expenditure to compensate for the lack in the components of Household expenditure (C) and private investment (I) so as to ensure that the demand is maintained in the markets. This also leads to the Keynesian multiplier which suggests that every dollar spent on investment creates a multiplier effect and leads to an increased expenditure of more than one dollar.

effect of increase in expenditure