Aintree Racecourse is a racecourse in Aintree, Merseyside, England. The racecourse is best known for annually holding the world-famous Grand National steeplechase. 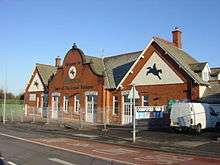 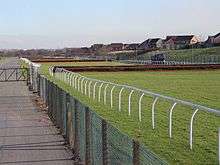 The course is home of the Grand National steeplechase, one of the most famous races in the world.[1] Prior to the event being held at Aintree, the race was run in the nearby district of Maghull. Steeplechasing at Aintree was introduced in 1839, though flat racing had taken place there for many years prior to this.[1] It is regarded as the most difficult of all courses to complete successfully, with 16 steeplechase fences including renowned obstacles the Chair, Foinavon, Valentine's, Canal Turn and Becher's Brook. These are so infamous that even their names strike fear into the most professional of jockeys. All fences bar the water jump are covered with spruce, unlike at any other course in British National Hunt racing. Four other races take place over the National fences. These are the Topham Chase (formerly known as the John Hughes Trophy Chase) and the Fox Hunters' Chase at the Grand National meeting, and the Grand Sefton Handicap Chase and Becher Chase in the November meeting. Within the large National course there is also the smaller Mildmay course containing hurdles and fences. These fences are made of traditional National Hunt material. The National and Mildmay courses used to share the water jump, but the water jump is no longer used on the Mildmay course.

The Grand National race is run over 4 miles 514 yards (6.907 km) after being re-measured by the BHA in 2015. The race is considered among the most demanding steeplechases in the world. The lead has often changed hands during the 494-yard (452 m) run-in after the final fence. There are usually 40 horses taking part in the race but fewer than ten may in fact complete the course. In 1928, 42 horses started and only two finished the course.[2] The record for the most victories in the Grand National is held by Red Rum, who won three times in the 1970s, in addition to coming second twice. 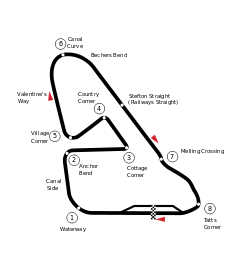 The only driver to have competed in both horse and motor race is Alfonso de Portago, who competed at the Grand National in his early days as well as in a sportscar race. He was to compete at the 1957 British Grand Prix at Aintree, but he was killed in the Mille Miglia. 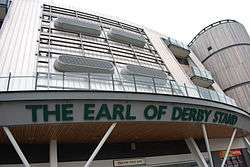 McFly performed for the Liverpool Summer Pops in 2005.

Kaiser Chiefs and The Chemical Brothers performed in concert at Aintree Pavilion as part of Liverpool Music Week 2007.

The racecourse contains a 9-hole golf course and driving range within its boundaries. Golfers have the chance to see the famous track from a different perspective and famous features such as Becher's Brook are incorporated into the course. It is accessed from Melling Road, which bisects the racecourse. Because of this, the golf facilities are closed when the course is used for horse or motor racing.