Not to be confused with Aqcha. 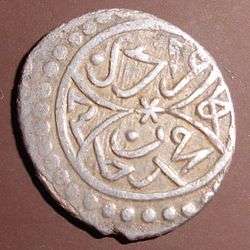 A silver coin, the akçe (Ottoman Turkish: آقچه‎) (pronounced akche) was the chief monetary unit of the Ottoman Empire. Three akçes were equal to one para. One-hundred and twenty akçes equalled one kuruş. Later after 1687 the kuruş became the main unit of account, replacing the akçe. In 1843, the silver kuruş was joined by the gold lira in a bimetallic system.[1] Its weight fluctuated, one source estimates it between 1.15 and 1.18 grams.[2] The name Akçe originally referred to a silver coin but later the meaning changed and it became a synonym for money.

The mint in Novo Brdo, a fortified mining town in the Serbian Despotate rich with gold and silver mines, began to strike Akçe in 1441 when it was captured by the Ottoman forces for the first time.[3]

The Suleiman Mosque in Istanbul is said to have cost 59 million akçe when it was constructed in the 1550s. This amount is said to have equalled 700,000 ducats in gold (probably Venetian).

Weight of Akçe in grams of silver and index.[4]