Original coat of arms of the lords and dukes of Albret.

Coat of arms of the lords and dukes of Albret since the 14th century.

The lordship (seigneurie) of Albret (Labrit), situated in the Landes, gave its name to one of the most powerful feudal families of France in the Middle Ages.

Its members distinguished themselves in the local wars of that epoch; and during the 14th century they espoused the English cause for some time, afterwards transferring their support to the side of France. [1]

Arnaud Amanieu, lord of Albret, helped to take Guienne from the English. His son Charles became constable of France, and was killed at the battle of Agincourt in 1415. Alain the Great, lord of Albret (d. 1522), wished to marry Anne of Brittany, and to that end fought against Charles VIII; but his hopes being defeated by the betrothal of Anne to Maximilian of Austria, he surrendered Nantes to the French in 1486.[1]

At that time the house of Albret had attained considerable territorial importance, due in great part to the liberal grants which it had obtained from successive kings of France. John of Albret, son of Alain, became king of Navarre by his marriage with Catherine of Foix. Their son Henry II, king of Navarre, was created duke of Albret and peer of France in 1550. By his wife Margaret d'Angoulême, sister of Francis I, he had a daughter, Jeanne d'Albret, queen of Navarre, who married Anthony de Bourbon, duke of Vendôme, and became the mother of Henry IV, king of France.[1]

The dukedom of Albret, united to the crown of France by the accession of this prince, was granted to the family of La Tour d'Auvergne (see duc de Bouillon) in 1651, in exchange for Sedan and Raucourt.[1]

To a younger branch of this house belonged Jean d'Albret, seigneur of Orval, count of Dreux and of Rethel, governor of Champagne (d. 1524), who was employed by Francis I in many diplomatic negotiations, more particularly in his intrigues to get himself elected emperor in 1519.[1] 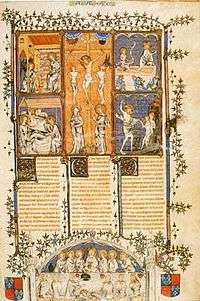 List of the Historical Bible (c. 1355) with d'Albret coat of arms in the corners and a signature of Jeanne d'Albret.

This article is issued from Wikipedia - version of the 2/18/2016. The text is available under the Creative Commons Attribution/Share Alike but additional terms may apply for the media files.