Little is known of Agache's life. He was born in Lille, France, and exhibited his work frequently in Paris until his death. He seems to have specialized in portraits and large-scale allegorical paintings. He was a member of the Société des Artistes Français, and won a third-class medal in 1885 for his work. He may have been friends with American painter James Abbott McNeill Whistler[1] and French writer Auguste Angellier; the latter dedicated a book to him around 1893.[2]

Two of his pieces, "Vanity" and "The Annunciation", were shown at the World's Columbian Exposition in Chicago, 1893. He was awarded the Légion d'honneur.[3] 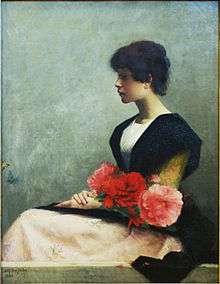 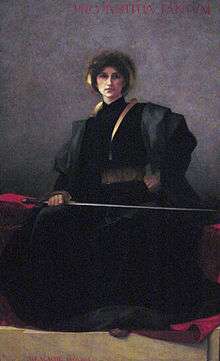 One of these paintings, L'Épée (French, "The Sword"), painted in 1896, includes the Latin phrase "PRO IUSTITIA TANTUM" ("On behalf of Justice Only") to represent that violence should be used only by Justice. It was displayed at the Paris Salon that year. It was purchased by the Canadian National Exhibition (CNE) in 1916 from an exhibition of paintings that were currently on loan from France. Following the CNE's decision in 1938 to cease collecting and exhibiting European art, the painting (with other French works) was loaned to the Art Gallery of Ontario (AGO); in the mid-1960s these works were formally donated to the AGO. This painting remained in the AGO's vaults until the early 1990s; it was cleaned and restored and displayed in the AGO's Fudger Gallery.

In June 2005, "L'Épée" was included in an exhibition called "Favourites: Your Choices from Our Collection", which displayed works based on votes from the general public from the previous four months.