Alfred Hitchcock Presents was an American television anthology series hosted by Alfred Hitchcock, which aired on CBS and NBC between 1955 and 1965. It featured dramas, thrillers, and mysteries. By the time it premiered on October 2, 1955, Hitchcock had been directing films for over three decades. Time magazine named it one of "The 100 Best TV Shows of all time".[1] The Writers Guild of America ranked it #79 on their list of the 101 Best-Written TV Series tying it with Monty Python's Flying Circus, Star Trek: The Next Generation and Upstairs, Downstairs.[2]

A series of literary anthologies with the running title Alfred Hitchcock Presents were issued to capitalize on the success of the television series. One volume, devoted to stories that censors wouldn't allow to be adapted for broadcast, was entitled Alfred Hitchcock Presents: Stories They Wouldn't Let Me Do on TV—though eventually several of the stories collected were adapted.

Alfred Hitchcock Presents is well known for its title sequence. The camera fades in on a simple line-drawing caricature of Hitchcock's rotund profile. As the program's theme music, Charles Gounod's Funeral March of a Marionette, plays, Hitchcock appears in silhouette from the right edge of the screen, and then walks to center screen to eclipse the caricature. He then almost always says "Good evening." (The theme music for the show was suggested by Hitchcock's long-time musical collaborator, Bernard Herrmann.)[3]

The caricature drawing, which Hitchcock created, and the use of Gounod's Funeral March of a Marionette as theme music have become indelibly associated with Hitchcock in popular culture.

Hitchcock appears again after the title sequence, and drolly introduces the story from a mostly empty studio or from the set of the current episode; his monologues were written especially for him by James B. Allardice. At least two versions of the opening were shot for every episode. A version intended for the American audience would often spoof a recent popular commercial or poke fun at the sponsor, leading into the commercial. An alternative version for European audiences would instead include jokes at the expense of Americans in general. For later seasons, opening remarks were also filmed with Hitchcock speaking in French and German for the show's international presentations.

Hitchcock closed the show in much the same way as it opened, but mainly to tie up loose ends rather than joke. He told TV Guide that his reassurances that the criminal had been apprehended were "a necessary gesture to morality."

Originally 25 minutes per episode, the series was expanded to 50 minutes in 1962 and retitled The Alfred Hitchcock Hour. Hitchcock directed 17 of the 268 filmed episodes of Alfred Hitchcock Presents and one of the 50-minute episodes, "I Saw the Whole Thing" with John Forsythe. The last new episode aired on June 26, 1965, and the series continued to be popular in syndication for decades.

In 1985, NBC aired a new TV movie pilot based upon the series, combining four newly filmed stories with colorized footage of Hitchcock from the original series to introduce each segment. The movie was a huge ratings success. Alfred Hitchcock Presents revival series debuted in the fall of 1985 and retained the same format as the pilot: newly filmed stories (a mixture of original works and updated remakes of original series episodes) with colorized introductions by Hitchcock. The new series lasted only one season before NBC cancelled it, but it was then produced for three more years by USA Network.

Guest stars and other actors

The broadcast history was as follows:[5]

Two episodes, both directed by Hitchcock himself, were nominated for Emmy Awards: "The Case of Mr. Pelham" (1955) with Tom Ewell, and "Lamb to the Slaughter" (1958) with Barbara Bel Geddes and Harold J. Stone. This episode ranked #59 on TV Guide's 100 Greatest Episodes of All Time.[6] The third season opener "The Glass Eye" (1957) won an Emmy Award for director Robert Stevens. An episode of The Alfred Hitchcock Hour titled "An Unlocked Window" (1965) earned an Edgar Award for writer James Bridges in 1966.

Among the most famous episodes remains writer Roald Dahl's "Man from the South" (1960) starring Steve McQueen and Peter Lorre, in which a man bets his finger that he can start his lighter ten times in a row. This episode was ranked #41 on TV Guide's 100 Greatest Episodes of All Time.[7] The episode was later referenced in the film Four Rooms, with Quentin Tarantino directing a segment called "The Man from Hollywood."

The 1962 episode "The Sorcerer's Apprentice" was not broadcast by NBC because the sponsor felt that the ending was too gruesome. The plot has a magician's helper performing a "sawing a woman in half" trick. Not knowing it is a gimmick, the helper cuts the unconscious woman in half. The episode has since been shown in syndication. It has been parodied by Penn and Teller on their cable show Penn and Teller: Bullshit!.

Universal Studios Home Entertainment has released the first five seasons of Alfred Hitchcock Presents on DVD in Region 1. Season 6 was released on November 12, 2013 via Amazon.com's CreateSpace program. This is a Manufacture-on-Demand (MOD) release on DVD-R, available exclusively through Amazon.com.[8] Season 6 DVD-R discs are expected to play back in DVD Video "play only" devices, and may not play in other DVD devices, including recorders and PC drives.

In Region 2, Universal Pictures UK has released the first three seasons on DVD.

In Region 4, Madman Entertainment has released all seven seasons on DVD in Australia. They have also released all three seasons of 'Alfred Hitchcock Hour'. 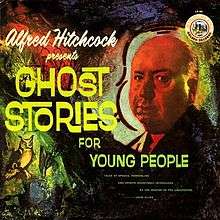 In 1962, Golden Records released a record album of six ghost stories for children titled Alfred Hitchcock Presents: Ghost Stories for Young People. The album, which opens with the Charles Gounod Alfred Hitchcock Presents theme music, is hosted by Hitchcock himself, who begins, "How do you do, boys and girls. I’m delighted to find that you believe in ghosts, too. After all, they believe in you, so it is only common courtesy to return the favor."[9] Hitchcock introduces each of the stories, all the while recounting a droll story of his own failed attempts to deal with a leaky faucet (which at the conclusion of the album leads to Hitchcock "drowning" in his flooded home). The ghost stories themselves, accompanied by minimal sound effects and music, are told by actor John Allen, four of which he wrote himself,[9] and two of which are adaptations: