An all-female band is a musical group in popular music genres such as rock, blues, jazz and related genres which is exclusively composed of female musicians. This is distinct from a girl group, in which the female members are solely vocalists, though this terminology is not universally followed.[1] While all-male bands are common in many rock and pop scenes, all-female bands are less common. 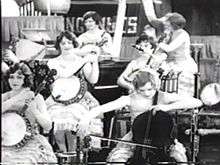 The Ingenues from the 1938 short film Maids and Music.

In the Jazz Age and during the 1930s, "all-girl" bands such as The Blue Belles, the Parisian Redheads (later the Bricktops), Lil-Hardin's All-Girl Band, The Ingenues, The Harlem Playgirls, Phil Spitalny's Musical Sweethearts and "Helen Lewis and Her All-Girl Jazz Syncopators" were popular. Dozens of early sound films were made of the vaudeville style all-girl groups, especially short subject promotional films for Paramount and Vitaphone.[2] (In 1925, Lee DeForest filmed Lewis and her band in his short-lived Phonofilm process, in a film now in the Maurice Zouary collection at the Library of Congress.[3]) Blanche Calloway, sister of Cab Calloway, led a male band, Blanche Calloway and Her Joy Boys, from 1932 to 1939, and Ina Ray Hutton led an all-girl band, the Melodears, from 1934 to 1939. Eunice Westmoreland, under the name Rita Rio, led an all-girl band appearing on NBC Radio and in short subjects for Vitaphone and RKO before changing her career to acting and her professional name to Dona Drake, appearing in numerous 1940's movies. All-girl bands active in vaudeville, variety and in early sound films during the 1920s to the 1950s are documented by Kristin McGee in Some Liked it Hot: Jazz Women in Film and Television. Sally Placksin, Linda Dahl, D. Antoinette Handy and Frank Driggs along with professor Sherrie Tucker, in her book Swing Shift: "All-Girl" Bands of the 1940s, have also documented this era. A Polish group Filipinki was established in 1959.[4]

Bands composed solely of women began to emerge with the advent of rock and roll. Among the earliest all-female rock bands to be signed to a record label were Goldie & the Gingerbreads, to Atlantic Records in 1964, The Pleasure Seekers with Suzi Quatro to Hideout Records in 1964 and Mercury Records in 1968, The Feminine Complex to Athena Records in 1968, and Fanny (who pioneered the all-female band sound in the early to mid-1970s) in 1969 when Mo Ostin signed them to Warner Bros. Records. There were also others, such as The Liverbirds (1962–1967), the Ace of Cups (1967), The Heart Beats (1968), and Ariel (1968–1970) which included the three members of The Deadly Nightshade.

Roger Ebert, in his audio commentary for Beyond the Valley of the Dolls (1970) gives the film credit for inspiring all-female rock bands, with the fictional band Carrie Nations created for the film, stating that such bands were quite rare at the time, but started to spring up in the film's wake.

In 1975, the Canadian duo of sisters, Kate & Anna McGarrigle, recorded the first of a string of albums, sometimes joined by their sister Jane. The Runaways were an early commercially successful, hard-edged, all-female hard rock band, releasing their first album in 1976: band members Joan Jett, Cherie Currie and Lita Ford all went on to solo careers.

In the United Kingdom, the advent of punk in the late 1970s with its "anyone can do it" ethos lead to the formation of such bands as The Slits, The Raincoats, Mo-dettes, and Dolly Mixture, The Innocents among others, and the formation of other groups where the female members influenced the music and lyrical content (Au Pairs, Delta 5) or were the featured artist within the ensemble, notably Siouxsie and the Banshees and X-Ray Spex. The expansion of punk into Europe gave rise to Switzerland's die Kleenex/LiLiPUT.

In Australia in 1977 all-girl band Sweet Jayne began doing regular gigs with the original lineup: Cris Bonacci, Chris Scheri, Robyn Clark and Sally Zylstra. Labelled 'Sweet and Heavy Rock', Sweet Jayne played mostly original material. Winning the Australasian Yamaha Battle of the Bands in 1978, Sweet Jayne went on through various cassette, vinyl and film clip releases and line up changes and played 700 gigs over 6 years. Sweet Jayne split up in 1983 when Chris Scheri (flute and vocals) and Cris Bonacci (guitar) were invited to the UK to work for Mike Oldfield.

The all-female heavy metal band Girlschool, from South London, formed in 1978 out of the ashes of Painted Lady, as a cover band. While somewhat successful in the UK, they became better known in the early 1980s. One of the original members of the band, Kathy Valentine departed to join the all-female band The Go-Gos', switching from guitar to bass. Among Girlschool's early recordings was an EP titled "The St. Valentines Day Massacre" which they recorded with Bronze label-mates Motörhead under the name Headgirl.

In 1974, The Deadly Nightshade, a rock/country band (Anne Bowen, rhythm guitar/percussion; Pamela Robin Brandt, electric bass; Helen Hooke, lead guitar/violin) was signed by RCA's custom label Phantom. The contract made RCA/Phantom the first mainstream record label to grant a band the right to reject any advertising offensive to feminist sensibilities. The band released two albums, "The Deadly Nightshade" in 1975 and "F&W (Funky & Western)" in 1976. Reunited in 2009, The Deadly Nightshade is recording a third album and touring.

The 1980s, for the first time, saw long-sought chart success from all-female bands and female-fronted rock bands. On the Billboard Hot 100 year-end chart for 1982[5] Joan Jett's I Love Rock 'n' Roll at #3 and the Go-Go's We Got the Beat at #25 sent a strong message out to many industry heads that females who could play could bring in money. While Joan Jett played "no-frills, glam-rock anthems, sung with her tough-as-nails snarl and sneer",[6] the Go-Go's were seen as playful girls,[7] an image that even Rolling Stone magazine poked fun at when they put the band on their cover in their underwear along with the caption "Go-Go's Put out!".[8][9] However musician magazines were starting to show respect to female musicians, putting Bonnie Raitt[10][11] and Tina Weymouth[12] on their covers. While The Go-Go's and The Bangles, both from the LA club scene, were the first all-female rock bands to find sustained success, individual musicians paved the way for the industry to seek out bands that had female musicians and allow them to be part of the recording process.

While the 1980s helped pave the way for female musicians to get taken more seriously it was still considered a novelty of sorts for several years, and it was very much a male-dominated world.[13] In 1984 when film maker Dave Markey, along with Jeff and Steve McDonald from Redd Kross,[14] put together the mockumentary Desperate Teenage Lovedolls, a comically punky version of Beyond the Valley of the Dolls,[15] it also spawned a real band.[16] While the Lovedolls could barely play at first, because of the film, and because they were an "all-female band", they received press and gigs.

Klymaxx became the first self-produced all-female band in the R&B/Pop style of music to all play an instrument; several of their singles charted in both R&B and pop countdowns.

Leading into the 1990s the surge of Heavy Metal in the 1980s helped to shed another light on the role of females in music. Because of the success of The Go-Go's and The Bangles many females were frustrated at not being taken seriously or only thought of as "cute chicks playing music"[17] and either joined rock bands or formed all-female metal bands. One such band that was playing harder music in San Francisco was Rude Girl.[18] Originally signed to CBS records the band splintered before an album would be released and the remaining members released a 12-inch single in 1987 under the name Malibu Barbi.[19] When Cara Crash and Wanda Day left 4 Non Blondes and joined the band[20] their sound shifted from heavy metal to a sound described as combining a "driving beat with Johnny Rottenesque vocal and post-punk riffs".[21] Around the same time in the Midwest, Madam X was signed to an offshoot of Columbia Records, Jet Records. In 1984 the Rick Derringer-produced[22] album We Reserve The Right was released along with the single "High in High School".[23] The Petrucci sisters were a focal point of the band – Max, the lead guitarist, and Roxy, the drummer. However, based on management decisions, it was decided that it would be better if only one of the sisters were in the band and Roxy was placed in another band, the all-female, Los Angeles–based Vixen.[24]

With the resurgence of interest in pop-punk bands in the US in the early 1990s, along with the sunset strip 'hair metal' scene becoming extremely crowded, bands who combined a "non-image" with loud raw music started were gigging at clubs like Rajis in Hollywood.[25] Bands such as Hole, Super Heroines, The Lovedolls and L7 became popular, while demonstrating on stage, and in interviews, a self-confident "bad girl" attitude at times, always willing to challenge assumptions about how an all-female band should behave. Courtney Love described the other females in Hole as using a more "lunar viewpoint" in their roles as musicians.[26] In the 1990s, Riot Grrrl became the genre associated with bands such as Bratmobile and Bikini Kill. Other punk bands, such as Spitboy, have been less comfortable with the childhood-centered issues of much of the Riot Grrrl aesthetic, but nonetheless also have dealt explicitly with feminist and related issues.[27] All-female Queercore[28] bands, such as Tribe 8 and Team Dresch, also write songs dealing with matters specific to women and their position in society. A film put together by a San Diego psychiatrist, Dr. Lisa Rose Apramian, along with the former drummer from The Motels and The Droogs, Kyle C. Kyle,[29][30] the documentary Not Bad For a Girl explored some of these issues with interviews from many of the female musicians on the Riot Grrrl scene at the time.[31]

Many female musicians from all-female bands in the 1980s and 1990s have gone on to more high-profile gigs. The Pandoras former members include members of The Muffs; Leather Leone, the singer from Rude Girl and Malibu Barbi, went on to sing for Chastain; Warbride's founder and lead guitarist, Lori Linstruth joined Arjen Lucassen; Abby Travis from the Lovedolls has played with Beck, Elastica, and Bangles; Meredith Brooks, from The Graces, went on to solo success and Janet Robin, from Precious Metal, was the touring guitarist for Meredith as well as Lindsey Buckingham and Air Supply. Sweet Jayne's Cris Bonacci became Girlschool's lead guitarist in 1985 and stayed with the band for over 10 years. Girlschool, despite numerous line-up changes, never broke up and recently celebrated their 30th anniversary.

All-female bands are not restricted to the mainstream genres. The British/Australian string quartet Bond play classical crossover (first and second violin, viola, and cello) and sing the occasional vocals that accompany some of their tracks.