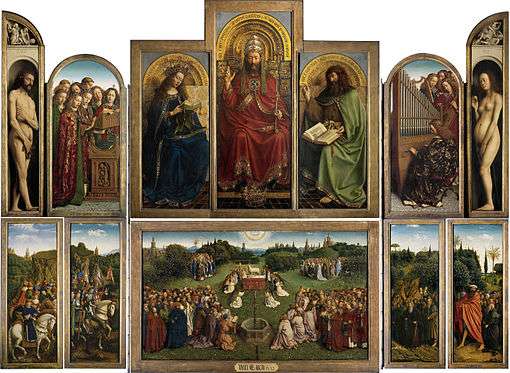 The Ghent Altarpiece (1432) by Hubert and Jan van Eyck. Considered one of the masterpieces of Northern Renaissance art, a complex polyptych panel painting, which lost its elaborate framework in the Reformation

An altarpiece is an artwork such as a painting, sculpture or relief representing a religious subject made for placing behind the altar of a Christian church.[1][2][3] Though most commonly used for a single work of art such as a painting or sculpture, or a set of them, the word can also be used of the whole ensemble behind an altar, otherwise known as a reredos, including what is often an elaborate frame for the central image or images. Altarpieces were one of the most important products of Christian art especially from the late Middle Ages to the era of the Counter-Reformation.[4]

Large number of altarpieces are now removed from their church settings, and often their elaborate sculpted frameworks, and displayed as more simply framed paintings in museums and other places.

Altarpieces seem to have begun to be used during the 11th century, with the possible exception of a few earlier examples. The reasons and forces that led to the development of altarpieces are not generally agreed upon. The habit of placing decorated reliquaries of saints on or behind the altar, as well as the tradition of decorating the front of the altar with sculptures or textiles, preceded the first altarpieces.[5]

Many early altarpieces were relatively simple compositions in the form of a rectangular panel decorated with series of saints in rows, with a central more pronounced figure such as a depiction of Mary or Christ. An elaborate example of such an early altarpiece is the Pala d'Oro in Venice. The appearance and development of these first altarpieces marked an important turning point both in the history of Christian art and Christian religious practice.[5] As pointed out in the Grove Encyclopedia of Medieval Art and Architecture, "The advent of the altarpiece marks a significant development not only in the history of the altar, but also in the nature and function of the Christian image. The autonomous image now assumed a legitimate position at the centre of Christian worship."[5]

The emergence of panel painting

Vigoroso da Siena's altarpiece from 1291, an example of an early painted panel altarpiece, with the individual parts framed by gables and sculptured elements

Painted panel altars emerged in Italy during the 13th century.[6] In the 13th century, it is not uncommon to find frescoed or mural altarpieces in Italy: mural paintings behind the altar function as visual complements for the liturgy.[7] These altarpieces were influenced by Byzantine art, notably icons, which reached Western Europe in greater numbers following the conquest of Constantinople in 1204. During this time, altarpieces occasionally began to be decorated with an outer, sculptured or gabled structure with the purpose of providing a frame for individual parts of the altarpiece. Vigoroso da Siena's altarpiece from 1291 (pictured) display such an altarpiece. This treatment of the altarpiece would eventually pave the way for the emergence, in the 14th century, of the polyptych.[5]

The sculpted elements in the emerging polyptychs often took inspiration from contemporary Gothic architecture. In Italy, they were still typically executed in wood and painted, while in northern Europe altarpieces were often made of stone.[5]

The early 14th century saw the emergence, in Germany, the Netherlands and the Baltic region, of the winged altarpiece.[5][6] By hinging the outer panels to the central panel and painting them on both sides, the motif could be regulated by opening or closing the wings. The pictures could thus be changed depending on liturgical demands. The earliest often displayed sculptures on the inner panels, i.e. displayed when open, and paintings on the back of the wings, displayed when closed.[5][6] With the advent of winged altarpieces, a shift in imagery also occurred. Instead of being centred on a single holy figure, altarpieces began to portray more complex narratives linked to the Christian concept of salvation.[6] 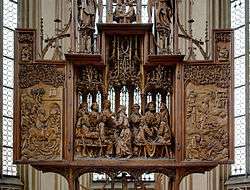 The Altarpiece of the Holy Blood, by Tilman Riemenschneider (1501–1505). An example of an altarpiece with a central, sculpted section and relief wings.

As the Middle Ages progressed, altarpieces began to be commissioned more frequently. By the 15th century, altarpieces were often commissioned by individuals, families and guilds and confraternities. The 15th century saw the birth of Early Netherlandish painting in the Low Countries; henceforth panel painting would dominate altarpiece production in the area. In Germany, sculpted wooden altarpieces were instead generally preferred, while in England alabaster was used to a large extent. The 15th century also saw a development of the composition of Italian altarpieces where the polyptych was gradually abandoned in favour of single-panel, painted altarpieces.[5] In Italy, during the Renaissance, free-standing groups of sculpture also began to feature as altarpieces.[6] In Spain, altarpieces developed in a highly original fashion into often very large, architecturally influenced reredos, sometimes as tall as the church in which it was housed.[6]

In the north of Europe, the Protestant Reformation from the early 16th century onwards led to a swift decline in the number of altarpieces produced.[8] Outbursts of iconoclasm locally led to the destruction of many altarpieces.[9] The Reformation in itself also promoted a new way of viewing religious art. Certain motifs, such as the Last Supper, were preferred before others. The Reformation regarded the Word of God – that is, the gospel – as central to Christendom, and Protestant altarpieces often displayed the actual words from the bible, sometimes at the expense of pictures. With time, Protestant though gave birth to the so-called pulpit altar, or Kanzelaltar in German, in which the altarpiece and the pulpit are combined, thus making the altarpiece quite literally the abode of the Word of God.[8]

Canvas painting started to replace other types of altarpieces during the mid-16th century and onwards.[4]

In the eighteenth century altarpieces, such as Piero della Francesca's polyptych of Saint Augustine, were often disassembled and seen as independent artworks. The different panels of the polyptych of St Augustine are thus today spread out among several different art museums.[10]

The usage and treatment of altarpieces were never formalised by the Catholic Church, and therefore their appearance can vary significantly.[5] Occasionally, the demarcation between what constitutes the altarpiece and what constitutes other forms of decoration can be unclear.[5] Altarpieces can still broadly be divided into two types, the reredos, which signifies a large and often complex wooden or stone altarpiece, and the retable, an altarpiece with panels either painted or with reliefs.[4] Retables are placed directly on the altar or on a surface behind it; a reredos typically rises from the floor.[4]

Retable-type altarpieces are often made up of two or more separate panels created using a technique known as panel painting. The panels can also display reliefs or sculpture in the round, either polychrome or un-painted. It is then called a diptych, triptych or polyptych for two, three, and multiple panels respectively. In the thirteenth century each panel was usually surmounted with a pinnacle, but during the Renaissance, single panel, or pala, altarpieces became the norm. In both cases the supporting plinth, or predella often featured supplementary and related paintings.

If the altar stands free in the choir, both sides of the altarpiece can be covered with painting. The screen, retable or reredos are commonly decorated. Groups of statuary can also be placed on an altar.[5] A single church can furthermore house several altarpieces on side-altars in chapels. Sometimes the altarpiece is set on the altar itself and sometimes in front of it.