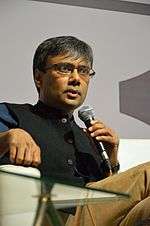 Amit Chaudhuri at the Kolkata Book Fair, Kolkata in 2014.

Amit Chaudhuri (born 1962) is an Indian English author and academic. He was awarded the Sahitya Akademi Award, Indian government's highest literary honour, in 2002 for his novel A New World. He is currently Professor of Contemporary Literature at the University of East Anglia.[1] In 2012, he won the Infosys Prize for Humanities-Literary Studies for his literary criticism.

He has written numerous novels, short stories, poems and critical essays in English. His novels have won several major awards and he has received international critical acclaim. His latest book is The Immortals, a novel about music in the modern world. 2008 saw the publication of Clearing a Space: Reflections on India, Literature and Culture, bringing together his major work as a critic. A collection of poems entitled St. Cyril Road and Other Poems appeared in 2005, and in 2001 he edited the influential The Picador Book of Modern Indian Literature. His study of D.H. Lawrence's poetry, D.H. Lawrence and 'Difference': Postcoloniality and the Poetry of the Present, was called 'truly groundbreaking' by Terry Eagleton in the London Review of Books.[3] He writes frequently for The London Review of Books, The Times Literary Supplement, and The Guardian. His work has appeared in Granta, The New Left Review, The Dublin Review, Bricks, n+1, Caravan and many other periodicals.[4]

Amit Chaudhuri is also an Indian classical musician, and singer and composer of Indo-Western experimental music, with an album from each of these genres. His project in experimental music,This is not Fusion, combines the raga, jazz, the blues, rock, techno, disco, and Indian pop. A second album, Found Music, was released by EMI in 2011.

On 18 March 2008, he was included in the panel for the Man Booker International Prize 2008, alongside writer Jane Smiley and essayist Andrey Kurkov. He is a Fellow of the Royal Society of Literature.

Chaudhuri is married to Rosinka Chaudhuri, Professor in Cultural Studies at the Centre for Studies in Social Sciences, Calcutta. She is the daughter of Shiva Ranjan and Sreelata Khastgir and granddaughter of Satish Ranjan Khastgir, a noted physicist, and elder brother of painter and art educator Sudhir Rajan Khastgir.[5]