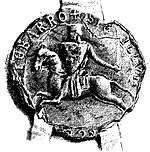 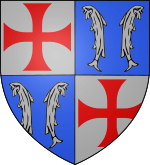 André de Montbard (5. November c. 1097 – 17 January 1156) was the fifth Grand Master of the Knights Templar and also one of the founders of the Order.

The Montbard family came from Hochadel in Burgundy, and André was an uncle of St. Bernard of Clairvaux, being a half-brother of Bernard's mother Aleth de Montbard.[1] He entered the Order in 1129 and went to Palestine, where he quickly rose to the rank of seneschal, deputy and second-in-command to the Grand Master. After the Siege of Ascalon on 22 August 1153, André was elected Grand Master to replace Bernard de Tremelay, who had been killed during an assault on the city on 16 August.

He died on 17 January 1156, in Jerusalem and was succeeded by Bertrand de Blanchefort.