Angus Maddison (6 December 1926 – 24 April 2010) was a British economist[1] specialising in quantitative macroeconomic history, including the measurement and analysis of economic growth and development. He was Emeritus Professor at the Faculty of Economics at the University of Groningen (RUG).

In 1953, Maddison joined the Organisation for European Economic Cooperation (OEEC), and afterwards became Head of the OEEC Economics Division. In 1963, when the OEEC became the Organisation for Economic Co-operation and Development (OECD), Maddison became Assistant Director of the Economic Development Department. In 1966–71 he took leave of absence and spent the next 15 years in a series of consulting appointments during which he returned to the OECD for four years. 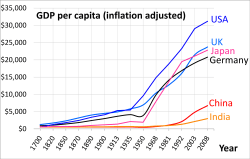 A graph compiled from Angus Maddison's data comparing the GDP per capita of a few major economies since 1700 AD. Since 1700 and before, Western countries were the richest.[3]

The global contribution to world's GDP by major economies from year 1 to 2003 according to Angus Maddison's estimates.[4] Before the 18th century, India and China were the two largest economies by GDP output.

In 1969–1971, Maddison worked at the Development Advisory Service of the Centre for International Affairs. Maddison also held the position of policy advisor for various institutions, including the governments of Ghana and Pakistan. In addition, he visited many other countries and often directly advised the government leaders of countries such as Brazil, Guinea, Mongolia, the USSR and Japan. This enabled him to gain insight into factors that determine economic growth and prosperity.

In 1978, Maddison was appointed historical Professor at the University of Groningen. Maddison was a pioneer in the field of the construction of national accounts, where a country's accounts are calculated back in periods of several decades all the way to the year 1. To this end he combined modern research techniques with his own extensive knowledge of economic history and in particular countries' performances in the field of GDP per capita. His work resulted in a deep new understanding of the reasons why some countries have become rich whereas others have remained poor (or have succumbed to poverty). In this field, Maddison was regarded as the world's most prominent scholar.

In the past two decades, Maddison mainly focussed on the construction of data and analysis further back in time. For example, he published an authoritative study on economic growth in China over the past twenty centuries. This study has strongly boosted the historical debate about the strengths and weaknesses of Europe and China as two of the world's leading economic forces. His estimates regarding the per capita income in the Roman Empire followed up the pioneering work of Keith Hopkins and Raymond W. Goldsmith.[5] He was also author of many works of historical economic analysis, including The World Economy: Historical Statistics and several other reference books on the same topic.

Until the end of his life, Maddison lived in Chevincourt, near Thourotte (France), but maintained strong connections with the University of Groningen. He was the joint founder and intellectual leader of the Groningen Growth and Development Centre,[6] a research group within the Faculty of Economics in Groningen that focuses on long-term economic growth. The databases maintained by Maddison and his former colleagues, which now include virtually every country in the world, form one of the most important sources for the analysis of long-term economic growth and are used throughout the world by academics and policy analysts.[7]

Maddison died on Saturday, 24 April 2010, at the American Hospital of Paris in Neuilly-sur-Seine, France.[9]