See also: History of Vietnam and Administrative divisions of the Tang dynasty

Annam was the name of the southernmost province of China after the Tang dynasty. The name is the Vietnamese form of the Chinese name "the Pacified South" (Chinese: 安南; pinyin: Ānnán; Vietnamese: An Nam), a clipped form of the full name, the "Protectorate General to Pacify the South" Chinese: 安南都護府; pinyin: Ānnán Dūhùfǔ; Vietnamese: An Nam đô hộ phủ. This was one of a number of such protectorates formed by Tang China.

Before the establishment of the protectorate, the area was governed as Jiaozhou (交州, Jiāozhōu) or Jiaozhi (Chinese: 交趾; pinyin: Jiāozhǐ; Vietnamese: Giao Chỉ). From its placement, it is now also sometimes known as Tonkin.

The territory was conquered for the Qin dynasty by Zhao Tuo after the death of Qin Shi Huang. In the chaos surrounding the Chu–Han Contention, he declared its independence as Nanyue and ruled from Panyu (modern Guangzhou). Jiaozhou was the Han dynasty country subdivision formed from the annexation of this tributary kingdom in 111 BCE and it initially comprised the areas of modern Guangdong, Guangxi, and northern Vietnam.

During the Three Kingdoms era, Eastern Wu split from Liangguang as Guangzhou in 222 CE.

The territory of Tang-era Annam is now part of present-day Vietnam.[1] 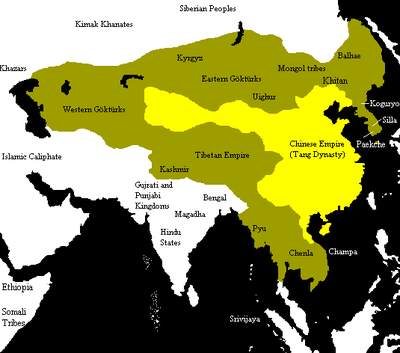 In 679, the Tang dynasty established Annam as their military government in Jiaozhi, but were not immediately successful because the local people did not recognize the Tang Dynasty and instead led a series of defensive wars against Tang forces. This is known in Vietnam as the "Third Northern Domination" of the country.

It was to remain Annam for the next 600 years, seemingly living up to its name. Annam was a peaceful territory, and became part of a succession of Chinese kingdoms: Eastern Wu, Jin, Liu Song, Southern Qi, Liang, Chen, Sui and the Tang. However, there were still revolts from time to time and periods of weaker government control.

Finally in 939, Ngô Quyền successfully expelled the Chinese at the Battle of Bạch Đằng where he beheaded the Commanding Admiral and Prince of the Southern Han dynasty, Liu Hongcao (劉弘操) and re-established the independent state of Đại Việt. This was the effective end of Annam as a Chinese province. Several attempts were made by various Chinese governments to retake Vietnam, with one succeeding (Ming rule of Vietnam) but only for 20 years (1407–1427).

In the 1860s, the French government under Napoleon III conquered first southern and then central Vietnam. The central portion of the country they ruled as the protectorate of Annam.