The Annaprashana (Sanskrit: अन्नप्राशन, Annaprāśana, Bengali: অন্নপ্রাশন, Onnoprashon) also known as annaprashana vidhi, annaprasan or Anna-prasanam, is a Hindu rite of passage ritual (Saṃskāra) that marks an infant's first intake of food other than milk. The term annaprashan literally means "food feeding" or "eating of food".[1] The ceremony is usually arranged in consultation with a priest, who arranges an auspicious date on which to conduct the ceremony. 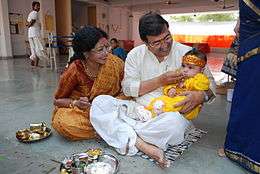 Referred to in English as first feeding with rice,[2] the ceremony is usually carried out when the child is six to eight months old and the teeth have begun to appear, though it may be weaned at a later time.[3] It is an occasion for celebration, and extended family, friends and neighbours will be invited to attend. Rice has become more common in modern times and symbolizes food in general.[1]

The Annaprashana, unlike many other Samskaras, remains an important ceremony in modern India.[1]