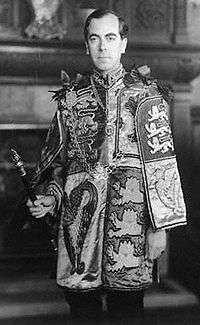 Sir Anthony Richard Wagner, while serving as Richmond Herald of Arms in Ordinary in 1952

Sir Anthony Richard Wagner KCB KCVO FSA (6 September 1908 – 5 May 1995) was a long-serving Officer of Arms at the College of Arms in London. He served as Garter Principal King of Arms before retiring to the post of Clarenceux King of Arms. He was one of the most prolific authors on the subjects of heraldry and genealogy of the 20th century.[1]

Wagner's distant ancestor, Melchior Wagner,[2] arrived in England from the Saxon city of Coburg in 1709 and became hatter to George I of Great Britain.

Wagner joined the College of Arms as Portcullis Pursuivant of Arms in Ordinary in 1931. He was promoted to Richmond Herald of Arms in Ordinary in 1943 and Garter Principal King of Arms in 1961. In 1978 he retired to the subordinate position of Clarenceux King of Arms. He was a firm believer in the view that appointments to the college were for life. As a herald he enjoyed a very large practice and was able to train up a number of skilled and well-qualified assistants who later became officers of arms. His professional library was enormous, but he was also able to build up an important collection of early heraldic manuscripts from the Clumber and other sales.

During World War II he served in the War Office for four years, and then moved to the Ministry of Town and Country Planning, where he rose to be Principal Private Secretary to a series of ministers. Although he contemplated remaining in the Ministry, he returned to the College of Arms in 1946 and took over the extensive practice of Alfred Butler, Windsor Herald.

One idea, which he pursued persistently, was the establishment of a museum in which to display the treasures of the College of Arms itself. Initially it was hoped to erect a building adjacent to the college, and a design was commissioned from Raymond Erith; this became impossible because of the increasing financial demands of repairs to the college itself. But in 1981 the Heralds' Museum opened in part of the Tower of London.

He was elected a Fellow of the American Society of Genealogists in 1944.[3]

Wagner had many interests outside the world and work of the College of Arms. He belonged to the Vintners' Company, serving as Master from 1973 to 1974; and was a member of a number of important dining clubs including the Society of Dilettanti, the antiquarian Cocked Hats, and the bibliophilic Roxburghe Club.

A number of large projects engaged his attention and enthusiasm. One, which arose from the Harleian Society, was an endeavour to list and describe the surviving English Rolls of Arms: to this series (CEMRA) Wagner contributed the first volume. Another project, connected with the Society of Antiquaries of London, was a revised edition of the ordinary of arms originally produced by J.W. Papworth. The first volume (of what was now entitled the Dictionary of British Arms) appeared in 1992.

Genealogy occupied the foremost place in Wagner's affections, but his earliest publications made highly important contributions to the study of heraldry. Issues of State Ceremonial took third priority. His Historic Heraldry of England (1939) derived initially from an exhibition of panels in America, but drew a stern and scholarly line between those great men who were truly armigerous and those who were not. On the other hand, his Heralds and Heraldry in the Middle Ages (also 1939) shed new light on the development of the functions of the earliest officers of arms. Many years later he traced the whole story of the College of Arms in a massive volume entitled Heralds of England (1967).[4]

Wagner's English Genealogy (1960; revised editions 1972 and 1983) remains a standard work of reference. Many of his conclusions were rehearsed and reinforced in Pedigree and Progress (1975), where an important group of essays is annotated and brought up to date. Always he stressed the mobility of social life and class in the course of English history, and in maintaining this view ran contrary to the opinions of some professional English historians.

His Records and Collections of the College of Arms (1952) remains a useful finding aid to the College's archival holdings.

His office had been highly mechanised from an early stage, but all the more so once he became blind in 1984, whereupon, making every use of the aids of modern science, he bore his affliction with patience and dexterity. He dictated his autobiography, A Herald's World (1988).

He was also a staunch supporter of hereditary peers and defended their presence in the House of Lords in an article in the Times on 30 January 1969 which became the foreword to the 1970 edition of Burke's Peerage.[5][6]

In 1953 (at the age of 44) Wagner married Gillian Graham, eldest daughter of Major H.A.R. Graham. In addition to taking over his father's house, 68 Chelsea Square, London, they acquired a house in Aldeburgh, Suffolk. The couple had a daughter and two sons.

Wagner's funeral service was held at the Church of St Benet Paul's Wharf, the religious home of the College of Arms since 1555. He was buried at Aldeburgh.