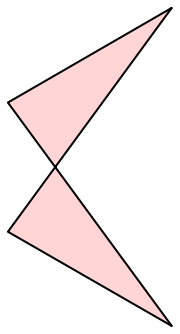 In geometry, an antiparallelogram is a quadrilateral having, like a parallelogram, two opposite pairs of equal-length sides, but in which the sides of one pair cross each other. The longer of the two pairs will always be the one that crosses. Antiparallelograms are also called contraparallelograms[1] or crossed parallelograms.[2]

Every antiparallelogram is a cyclic quadrilateral, meaning that its four vertices all lie on a single circle.

Uniform polyhedra and their duals 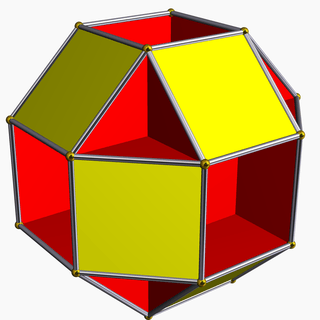 The small rhombihexahedron. Slicing off any vertex of this shape gives an antiparallelogram cross-section as the vertex figure. 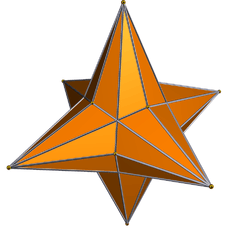 The small rhombihexacron, a polyhedron with antiparallelograms (formed by pairs of coplanar triangles) as its faces

Several nonconvex uniform polyhedra, including the tetrahemihexahedron, cubohemioctahedron, octahemioctahedron, small rhombihexahedron, small icosihemidodecahedron, and small dodecahemidodecahedron, have antiparallelograms as their vertex figures, the cross-sections formed by slicing the polyhedron by a plane that passes near a vertex, perpendicularly to the axis between the vertex and the center.[5]

Fixing the short edge of an antiparallelogram linkage causes the crossing point to trace out an ellipse. 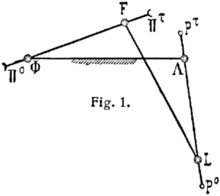 An antiparallelogram linkage with one of its long edges ΦΛ fixed as a base. The two points F and L move in circles of equal radius but opposite direction.

The antiparallelogram is an important feature in the design of Hart's inversor, a linkage that (like the Peaucellier–Lipkin linkage) can convert rotary motion to straight-line motion.[9] An antiparallelogram-shaped linkage can also be used to connect the two axles of a four-wheeled vehicle, decreasing the turning radius of the vehicle relative to a suspension that only allows one axle to turn.[2] A pair of nested antiparallelograms was used in a linkage defined by Alfred Kempe as part of his universality theorem stating that any algebraic curve may be traced out by the joints of a suitably defined linkage. Kempe called the nested-antiparallelogram linkage a "multiplicator", as it could be used to multiply an angle by an integer.[1] 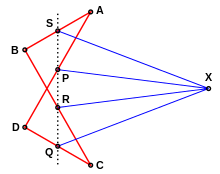 Antiparallelogram braced to stop it turning into a normal parallelogram. The points PQRS are the midpoints of the sides and are collinear, and X can be any distance away on the perpendicular bisector of SQ. With this linkage AS2+SX2=AP2+PX2.

Without bracing an antiparallelogram linkage can be turned into a normal parallelogram. It can be braced to stop this happening using a construction by Abbott and Barton 2004. This construction can be used to fix a problem in Kempe's Universality Theorem.[10]

In the n-body problem, the study of the motions of point masses under Newton's law of universal gravitation, an important role is played by central configurations, solutions to the n-body problem in which all of the bodies rotate around some central point as if they were rigidly connected to each other. For instance, for three bodies, there are five solutions of this type, given by the five Lagrangian points. For four bodies, with two pairs of the bodies having equal masses, numerical evidence indicates that there exists a continuous family of central configurations, related to each other by the motion of an antiparallelogram linkage.[11]