Appalshop is a media, arts, and education center located in Whitesburg, Kentucky, in the heart of the southern Appalachian region of the United States.

Appalshop was founded in 1969 under the leadership of Bill Richardson as a project of the United States government's War on Poverty.[1] The organization was one of ten Community Film Workshops started by a partnership between the federal Office of Economic Opportunity and the American Film Institute.[2] a In 1974 the worker-operated organization evolved into a nonprofit company called Appalshop and established itself as a hub of filmmaking in Appalachia, and since that time has produced more than one hundred films, covering such subjects as coal mining, the environment, traditional culture, and the economy. 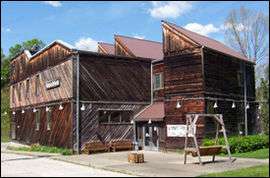 Since 1985, Appalshop has also operated WMMT-FM (Mountain Community Radio), a radio station located in Whitesburg, Kentucky which serves much of central Appalachia (including portions of eastern Kentucky, southwest Virginia, and western West Virginia) with music and programming relevant to the region and its culture. WMMT also broadcasts live on the web.