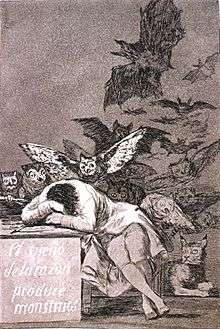 Aquatint is an intaglio printmaking technique, a variant of etching.[1]

In intaglio printmaking, the artist makes marks on the plate (in the case of aquatint, a copper or zinc plate) that are capable of holding ink. The inked plate is passed through a printing press together with a sheet of paper, resulting in a transfer of the ink to the paper. This can be repeated a number of times, depending on the particular technique.

Like etching, aquatint uses the application of a mordant to etch into the metal plate. Where the engraving technique uses a needle to make lines that print in black (or whatever colour ink is used), aquatint uses powdered rosin to create a tonal effect. The rosin is acid resistant and typically adhered to the plate by controlled heating. The tonal variation is controlled by the level of mordant exposure over large areas, and thus the image is shaped by large sections at a time.

Another tonal technique, mezzotint, begins with a plate surface that is evenly indented so that it will carry a fairly dark tone of ink. The mezzotint plate is then smoothed and polished to make areas carry less ink and thus print a lighter shade. Alternatively, beginning with a smooth plate, areas are roughened to make them darker. Occasionally these two techniques are combined.

The painter and printmaker Jan van de Velde IV invented the aquatint technique in Amsterdam, around 1650.[2] The cartographer Peter Perez Burdett later introduced his 'secret' aquatint technique to England in the 1770s.[3] In the United States the printmaker Pedro Joseph de Lemos popularized aquatints in art schools with his publications (1919–40), which simplified the cumbersome techniques, and with traveling exhibitions of his award-winning prints.[4] 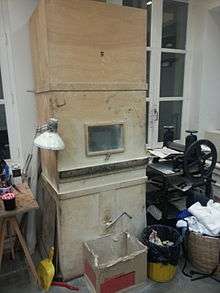 aquatint box, used to apply resin powder on the plate.

An aquatint requires a metal plate, an acid, and something to resist the acid. Traditionally copper or zinc plates were used. The artist applies a ground that will resist acid. Ground is applied by either dissolving powdered resin in spirits, applying the powder directly to the surface of the plate, or by using a liquid acrylic resist. In all forms of etching the acid resist is commonly referred to as "the ground."

An aquatint box is used to apply resin powder. The powder is at the bottom of the box, a crank or a bellows is used to blow the powder up into the air of the box. A window allows the engraver to see the density of flowing powder and to place his plate in the box using a drawer. When the powder covers the plate, it can be extracted from the box for the next operations.

The plate is then heated; if the plate is covered with powder, the resin melts forming a fine and even coat; if it is in spirits, the spirits evaporate and the result is essentially the same. Now the plate is dipped in acid, producing an even and fine level of corrosion (the "bite") sufficient to hold ink. At this point, the plate is said to carry about a 50% halftone. This means that, were the plate printed with no further biting, the paper would display a gray color more or less directly in between white (no ink) and black (full ink).

At some point the artist will then etch an outline of any aspects of the drawing s/he wishes to establish with line; this provides the basis and guide for the later tone work. S/he may also have applied (at the very start, before any biting occurs) an acid-resistant "stop out" (also called an asphaltum or hard ground) if s/he intends to keep any areas totally white and free of ink, such as highlights.

The artist then begins immersing the plate in the acid bath, progressively stopping out (protecting from acid) any areas that have achieved the designed tonality. These tones, combined with the limited line elements, give aquatints a distinctive, watery look. Also, aquatints, like mezzotints, provide ease in creating large areas of tone without laborious cross-hatching; but aquatint plates, it is noted, are generally more durable than mezzotint plates.

The first etch should be for a short period (30 seconds to 1 minute, with a wide variation depending on how light the lightest tones are meant to be). A test piece may be made with etching times noted, as the strength of the etchant will vary. More than thirty minutes should produce a very dark area. Etching for many hours (up to 24) will be as dark as etching for one hour, but the deep etch would produce raised ink on the paper.

Contemporary printmakers often use spraypaint instead of a powder, particularly when using the technique known as sugar-lift. To produce a printing surface using sugar-lift, the artist makes a solution of India ink and sugar by melting sugar into heated ink. This mixture is then applied to a prepared plate with a brush, allowing for a bold expression not possible with the most etching techniques. When the ink/sugar mixture is dry the plate is coated with asphaltum (liquid ground); the plate is then submerged in warm water which dissolves the sugar so that the image "lifts off" the plate. The exposed areas are then aquatinted to hold ink and the plate is ready to be printed from.

Aquatint by Goya, from the Cycle "Los Caprichos": Can't Anyone Untie Us?