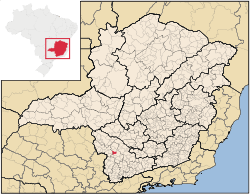 Location of Areado within Minas Gerais

Areado is a Brazilian municipality in the state of Minas Gerais. At the 2001 census its population was estimated to be 12,228. Most of the population lives in the city. The estimated population living in the city was 9,790. This city is the most urban city among the small cities nearby.

The city is located near the Furnas' dam.