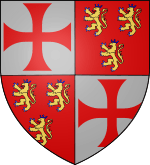 Armand de Périgord (or Hermann de Pierre-Grosse) (1178–1247?) was a descendant of the Counts of Périgord and a Grand Master of the Knights Templar.

He was master of the Province of Apulia and Sicily from 1205 to 1232. In 1232, he was elected Grand Master of the Templars. He organized attacks on Cana, Safita, Sephoria and Praetoria, and against the Muslim positions around the Sea of Galilee. All of these expeditions were failures and diminished the Templars' effectiveness.

In 1236, on the border between Syria and Cilicia, 120 knights, along with some archers and Turcopoles, were ambushed near the town of Darbsâk (Terbezek). In the first phase of the battle, the Templars reached the town but they met fierce resistance. When reinforcements from Aleppo arrived, the Templars were massacred. Fewer than twenty of them returned to their castle in Bagras, fifteen km from the battle.