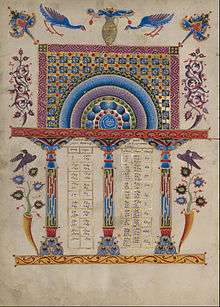 An illuminated manuscript from the 13th century, drawn by Toros Roslin

Armenian illuminated manuscripts form a separate tradition, related to other forms of Medieval Armenian art, but also to the Byzantine tradition. The earliest surviving examples date from the Golden Age of Armenian art and literature in the 5th century. Early Armenian Illuminated manuscripts are remarkable for their festive designs to the Armenian culture; they make one feel the power of art and the universality of its language.[1] The greatest Armenian miniaturist, Toros Roslin, lived in the 13th century. 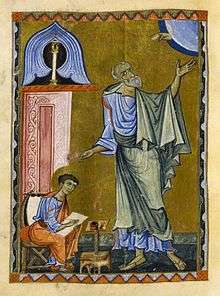 Another form of an illuminated manuscript is a prayer roll, which traditionally included images from the Armenian iconography as well as Biblical passages or teachings but at a much smaller size was a more personal, and portable, religious treasure. Armenian prayer rolls could include iconography applicable to all Christian sects such as images of St. Mark, or St. Luke, or St. John as well as panels depicting important moments in the life of Jesus Christ. For the Armenians, however, the rolls would also include illustrations specific to the history of their country or church. These included St. Gregory the Illuminator credited with bringing Christianity to Armenian in the 4th century or St. Nerses IV important to the growth of Christianity in Armenia in the 12th century as well as establishing the theology of icon veneration within the Armenian Church.[3] As in the case of other traditional Armenian manuscripts, prayer rolls were drawn and illustrated by hand on vellum. The scroll served as a personal talisman for the protection of its owner or for needs and prayer intentions of members of their family. Prayer rolls were narrow in width and included panels of religious illustration followed by religious text. The rolls were always quite long although exact measurements varied, depending on the number of panels it contained. The owner of this religious artifact could tightly roll the vellum and conceal it when carried. Concealment was crucial for protection of the prayer roll, since illuminated manuscripts and prayer rolls were highly valued and targeted by thieves. Devout Armenians held manuscripts and other works of art of the Church in high regard due to the fact the church and its teachings were an important part of daily life in medieval Armenia; the church fulfilled all spiritual, social, moral and cultural needs.[4] 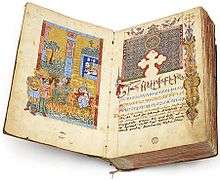 A manuscript showing the Adoration of the Magi on the left-hand page, dates from 1632.

About 31,000 manuscripts[5] still survive after continuous invasions of Armenia throughout the centuries and the more recent Armenian Diaspora where hundreds of thousands of Armenians were displaced or massacred. Illuminated manuscripts mostly recount religious teachings and gospels of the Armenians and were handed down through families. So valuable were these manuscripts it was regarded as a sacrilege to sell or damage them, or to allow the manuscripts to fall into enemy hands. Most of the manuscripts were written and illustrated by monks located in monasteries. Many manuscripts are very elaborate, covered in gilt and brilliant colors. However, there is another type of manuscript which was stripped of unnecessary ornamentation, lacking colored backgrounds and painted with transparent colors, often with less than perfect artistry.[6] Manuscripts were adorned with fantastical creatures and birds, which often formed the initial letters of chapters to attract the eye, while providing a mental break during which the beauty of the illustration could refresh the mind and spirit. These brilliantly illustrated letters were followed by “erkat’agir”, an uncial script also known as iron script, as it originally was carved into stone. Notary script known as “notrgir” was used for writing the script and colophon and “bologir,” meaning “rounded letters”[7][8] was often used as a minuscule in writing the rubrics,[5] which are sections written in red ink in order to draw attention. Black lettering was used to write the chapters, symbolizing the pain of original sin, while the white paper space symbolized the innocence of birth.[9] The colophon, also written in red ink, was usually found at the beginning or end of the manuscript and would provide information about the scribe, the patron, the artist, the date, when, where, and for whom the manuscript was created. Often the scribe would add notes about his working conditions or anecdotes of wisdom in the colophon and often was carried into the margins of the manuscript.[10] So important was owning a manuscript, the owner would add his name into the script. If a manuscript had multiple owners, multiple signatures might be found within the script.[7]