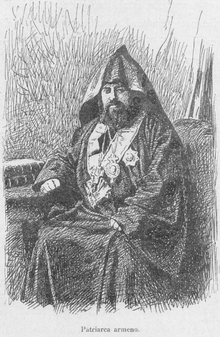 The Armenian Patriarch of Constantinople in 1878. 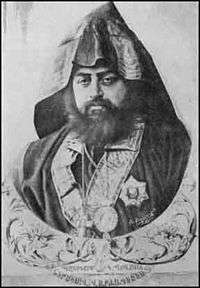 The Armenian Patriarchate of Constantinople recognizes the primacy of the Catholicos of All Armenians, in the spiritual and administrative headquarters of the Armenian Church, the Etchmiadzin, Republic of Armenia, in matters that pertain to the worldwide Armenian Apostolic Church. In local matters, the Patriarchal See is autonomous.

There have been 84 individual Patriarchs since establishment of the Patriarchate:

In 1896 Patriarch Madteos III (Izmirlian) was deposed and exiled to Jerusalem by Sultan Abdülhamid II for boldly denouncing the 1896 massacre. The constitution governing the Armenians was suspended by the Sultan.