Army of the Potomac

The Army of the Potomac was the principal Union Army in the Eastern Theater of the American Civil War. It was created in July 1861 shortly after the First Battle of Bull Run and was disbanded in June 1865 following the surrender of the Confederate Army of Northern Virginia in April.

The Army of the Potomac was created in 1861, but was then only the size of a corps (relative to the size of Union armies later in the war). Its nucleus was called the Army of Northeastern Virginia, under Brig. Gen. Irvin McDowell, and it was the army that fought (and lost) the war's first major battle, the First Battle of Bull Run. The arrival in Washington, D.C., of Maj. Gen. George B. McClellan dramatically changed the makeup of that army. McClellan's original assignment was to command the Division of the Potomac, which included the Department of Northeast Virginia under McDowell and the Department of Washington under Brig. Gen. Joseph K. Mansfield. On July 26, 1861, the Department of the Shenandoah, commanded by Maj. Gen. Nathaniel P. Banks, was merged with McClellan's departments and on that day, McClellan formed the Army of the Potomac, which was composed of all military forces in the former Departments of Northeastern Virginia, Washington, Pennsylvania, and the Shenandoah. The men under Banks's command became an infantry division in the Army of the Potomac.[1] The army started with four corps, but these were divided during the Peninsula Campaign to produce two more. After the Second Battle of Bull Run, the Army of the Potomac absorbed the units that had served under Maj. Gen. John Pope. 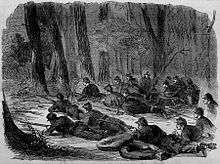 The Army of the Potomac – Our Outlying Picket in the Woods, 1862

The Army of the Potomac underwent many structural changes during its existence. The army was divided by Ambrose Burnside into three grand divisions of two corps each with a Reserve composed of two more. Hooker abolished the grand divisions. Thereafter the individual corps, seven of which remained in Virginia, reported directly to army headquarters. Hooker also created a Cavalry Corps by combining units that previously had served as smaller formations. In late 1863, two corps were sent West, and—in 1864—the remaining five corps were recombined into three. Burnside's IX Corps, which accompanied the army at the start of Ulysses S. Grant's Overland Campaign, rejoined the army later. For more detail, see the section Corps below.

The Army of the Potomac fought in most of the Eastern Theater campaigns, primarily in (Eastern) Virginia, Maryland, and Pennsylvania. After the end of the war, it was disbanded on June 28, 1865, shortly following its participation in the Grand Review of the Armies.

The Army of the Potomac was also the name given to General P. G. T. Beauregard's Confederate army during the early stages of the war (namely, First Bull Run; thus, the losing Union Army ended up adopting the name of the winning Confederate army). However, the name was eventually changed to the Army of Northern Virginia, which became famous under General Robert E. Lee.

In 1869 the Society of the Army of the Potomac was formed as a veterans association. It had its last reunion in 1929.

Saint Patrick's Day celebration in the Army of the Potomac, depicting a steeplechase race among the Irish Brigade, March 17, 1863, by Edwin Forbes.

Because of its proximity to the large cities of the North, such as Washington, D.C., Philadelphia, and New York City, the Army of the Potomac received more contemporary media coverage than the other Union field armies. Such coverage produced fame for a number of this army's units. Individual brigades, such as the Irish Brigade, the Philadelphia Brigade, the First New Jersey Brigade, the Vermont Brigade, and the Iron Brigade, all became well known to the general public, both during the Civil War and afterward.

Scouts and guides, Army of the Potomac, Mathew Brady

Beginning on March 13, 1862, President Abraham Lincoln established corps as the major subordinate units of the Army of the Potomac. (Up until this time, McClellan resisted the formation of corps, which had been prominent features of Napoleon's army, preferring to see how his division commanders fared in combat on the Peninsula before elevating them to higher command. Lincoln selected the corps commanders based on their seniority, without McClellan's approval.) The original corps were I Corps (McDowell), II Corps (Sumner), III Corps (Heintzelman), and IV Corps (Keyes). During the Peninsula Campaign, McClellan created two more, commanded by men he considered more loyal to him: V Corps (Porter) and VI Corps (Franklin).

For the remainder of the war, corps were added and subtracted from the army. IV Corps was broken up after the Peninsula Campaign, with its headquarters and 2nd Division left behind in Yorktown, while its 1st Division moved north, attached to the VI Corps, in the Maryland Campaign. Those parts of the IV Corps that remained on the Peninsula were reassigned to the Department of Virginia and disbanded on October 1, 1863.[2] Those added to the Army of the Potomac were IX Corps, XI Corps (Sigel's I Corps in the former Army of Virginia), XII Corps (Banks's II Corps from the Army of Virginia ), added in 1862; and the Cavalry Corps, created in 1863. Eight of these corps (seven infantry, one cavalry) served in the army during 1863, but due to attrition and transfers, the army was reorganized in March 1864 with only four corps: II, V, VI, and Cavalry. Of the original eight, I and III Corps were disbanded due to heavy casualties and their units combined into other corps. The XI and XII Corps were ordered to the West in late 1863 to support the Chattanooga Campaign, and while there were combined into the XX Corps, never returning to the East.

The IX Corps returned to the army in 1864, after being assigned to the West in 1863 and then serving alongside, but not as part of, the Army of the Potomac from March to May 24, 1864. On that latter date, IX Corps was formally added to the Army of the Potomac.[3] Two divisions of the Cavalry Corps were transferred in August 1864 to Maj. Gen. Philip Sheridan's Army of the Shenandoah, and the 2nd Division alone remained under Meade's command. On March 26, 1865, that division was also assigned to Sheridan for the closing campaigns of the war.[4]

Lt. Gen. Ulysses S. Grant, general-in-chief of all Union armies, located his headquarters with the Army of the Potomac and provided operational direction to Meade from May 1864 to April 1865, but Meade retained formal command.