ASICS (アシックス, Ashikkusu) (stylized as asics) is a Japanese multinational corporation athletic equipment company which produces footwear and sports equipment designed for a wide range of sports, generally in the upper price range. The name is an acronym for the Latin phrase anima sana in corpore sano[1] which translates as "a healthy soul in a healthy body". In recent years their running shoes have often been ranked among the top performance footwear in the market.[2][3][4] 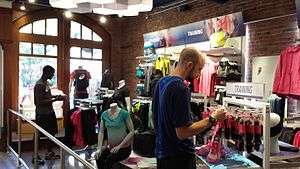 Inside of the ASICS store on Newbury Street, in the Back Bay section of Boston 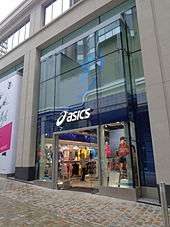 ASICS Ltd. began as Onitsuka Co., Ltd on September 1, 1949.[5] Its founder, Kihachiro Onitsuka, began manufacturing basketball shoes in his home town of Kobe, Hyogo Prefecture, Japan. Soon after the range of sports activities widened to a variety of Olympic styles used throughout the '50s, '60s and '70s by athletes worldwide. Onitsuka became particularly renowned for the Mexico 66[6] design, in which the distinctive crossed stripes, now synonymous with the company brand, were featured for the first time. In 1977, Onitsuka Tiger merged with GTO and JELENK to form ASICS Corporation. Despite the name change, a vintage range of ASICS shoes are still produced and sold internationally under the Onitsuka Tiger label.

On October 4, 2011, it was announced that ASICS will be the new official kit manufacturer for the Australian Cricket Team, replacing German manufacturer Adidas.[8]

Nike, Inc., originally known as BRS, was founded to sell Onitsuka Tiger shoes in the US. When Phil Knight visited Japan in 1963 right before he graduated from Stanford University, he was impressed by Onitsuka Tiger shoes with their high quality but reasonable prices. He immediately visited the Onitsuka Tiger office and asked to be their sales agent in the USA. When Knight founded Nike, he headhunted engineers from Onitsuka and made early Nike shoes at the Asahi Corporation in Fukuoka, Japan.