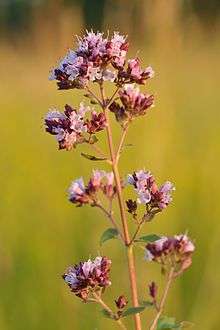 Most of the taxa belonging to this clade had been referred to the Asteridae in the Cronquist system (1981) and to the Sympetalae in earlier systems. The name asterids (not necessarily capitalised) resembles the earlier botanical name but is intended to be the name of a clade rather than a formal ranked name, in the sense of the ICBN.

The phylogenetic tree presented hereafter has been proposed by the APG IV project.[1]

Genetic analysis carried out after APG II maintains that the sister to all other asterids are the Cornales. A second order that split from the base of the asterids are the Ericales. The remaining orders cluster into two clades, the lamiids and the campanulids. The structure of both of these clades has changed in APG III.[2][3]

In APG III system, the following clades were renamed: