Auburn Correctional Facility is a state prison on State Street in Auburn, New York, United states. It was built on land that was once a Cayuga village.[2] It is classified as a maximum security facility.

Constructed in 1817[3] as Auburn Prison, it was the second state prison in New York (after New York City's Newgate, 1797-1828), the site of the first execution by electric chair in 1890, and the namesake of the "Auburn System," a correctional system in which prisoners were housed in solitary confinement in large rectangular buildings, and performed penal labor under silence that was enforced at all times. The prison was renamed the Auburn Correctional Facility in 1970.[1] The prison is among the oldest functional prisons in the United States.

The prison charged a fee for tourists in order to raise funds for the prison. Eventually, to discourage most visitors, the fee was increased.

The current front of Auburn Prison. Note the two guard towers on either side and Copper John on top

Lockstep in the Auburn Prison 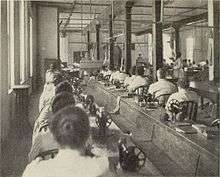 In contrast with the purely reformatory type prison instituted in Pennsylvania, the Philadelphia System introduced by the Quakers, the "Auburn System" modified the schedule of prayer, contemplation, and humane conditions with hard labor.

Prisoners were compelled to work during the day, and the profit of their labor helped to support the prison. Prisoners were segregated by offense; additionally they were issued clothing that identified their crime. The traditional American prison uniform, consisting of horizontal black and white stripes, originated at the Auburn prison. The prisoners had their heads closely cropped and walked in lockstep, keeping step with their heads bowed. Each prisoner placed a hand on the shoulder of the man in front of him to maintain a rigid separation.

There was a communal dining room so that the prisoners could gather together for meals, but a code of silence was enforced harshly at all times by the guards. Thus the inmates worked and ate together, but in complete silence. At night the prisoners were kept in individual cells (even though the original plan called for double cells).

For several decades, this system was adopted by other jurisdictions. This system was also called the "Congregate System." The Sing Sing Correctional Facility, also in New York, was built using this system under the supervision of the former warden of the Auburn prison, Elam Lynds.

As of 2010, Auburn Correctional Facility is responsible for the manufacturing of New York State's license plates.[4]

Copper John as he is today

Copper John is a statue of an American Revolutionary War soldier that stands atop the Auburn Correctional Facility. It has entered the local lexicon as a reference to the prison and aspects of it, for example, getting sent to Auburn Prison is "going to work for Copper John."

"John" was originally a wooden statue that was erected atop the administration office of the prison in 1821. In 1848, the statue had weathered so much that it was taken down and a new statue was made out of copper by the prisoners in the prison foundry. In 2004, the New York state government became aware that the statue was fashioned to be anatomically correct and ordered the statue to be "incorrected". Some correctional officers made an impromptu protest by passing out T-shirts showing the iconic statue and reading "Save Copper John's Johnson"; but the statue was nonetheless removed, his penis was filed off, and remounted in August.[5]

The warden was an administrative position appointed by the New York State Commissioner of Correction:

The Principal Keeper operated the prison on a day-to-day basis. Many went on to become wardens.[17] 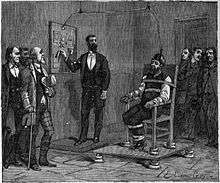 The execution of William Kemmler, August 6, 1890

Deaths at the prison