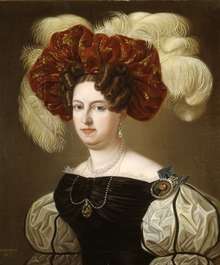 She was the daughter of the courtier Baron Otto Anders Koskull and Amalia Beata Silfversparre. Koskull became one of the first maids-of-honor appointed to the new queen, Frederica of Baden, in 1797. In 1800, the queen's unmarried ladies-in-waiting were dismissed by the king because of many scandals involving them. Impoverished, Koskull moved in with her aunt, Ulrika Katarina Koskull, and her aunt's husband, Count Magnus Fredrik Brahe.

Koskull was admired as an accomplished singer during her participation in the amateur theatre society of Princess Charlotte at Rosersberg Palace in 1802. When Prince William Frederick, cousin of George III stayed in Stockholm in 1802–1803, there were rumors of an affair with her. According to Charlotte, William Frederick said to her: "If she [Koskull] were your daughter, I would marry her!"[1]

In 1806, half a year after the death of her aunt, she married her aunt's widower, Count Magnus. She had two children, Ulrika Vilhelmina Brahe (1808–1836) and Magnus Brahe (1810–). In 1811, Count Magnus was appointed Swedish minister to France, and she accompanied him to Paris. There she attracted the attention of Napoleon, who called her la belle suédoise ("the beautiful Swede"). She became a center of the aristocratic life of Stockholm, a position she kept as a widow; it was said that she "with noble dignity took the lead in the most notable salon of the Swedish aristocracy" and her salon was described as "a school, where youth took their knowledge in the art of good mannered socializing"; also in her old age, she was said to keep a "beautiful and majestic appearance".[2] She influenced Swedish policy through her stepson, politician Magnus Brahe, who reportedly asked her for advice in matters of state.