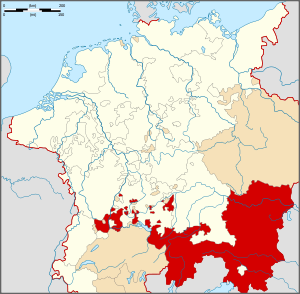 The Austrian Circle as at the beginning of the 16th century

The Austrian Circle (German: Österreichischer Reichskreis) was an Imperial Circle of the Holy Roman Empire. It was one of the four Imperial Circles created by decree after the 1512 Diet at Cologne, twelve years after the original six Circles were established in the course of the Imperial Reform. It roughly corresponds to present-day Austria (except for Salzburg and Burgenland), Slovenia and the Trentino-Alto Adige/Südtirol region of Northern Italy, but also comprised the Further Austrian territories in the former Swabian stem duchy. 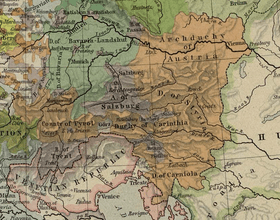 The Austrian Circle was largely coterminous with the "Hereditary Lands" (Erblande) of the Habsburg Monarchy, dominated by the Archduchy of Austria. Beside the Habsburg lands, it included the Prince-Bishoprics of Trent and Brixen, which, however, were largely ruled within the Habsburg lands of Tyrol.

The Circle's territory was again enlarged with the acquisition of the Bavarian Innviertel according to the 1779 Treaty of Teschen, as well as the Electorate of Salzburg and the Berchtesgaden Provostry by the German mediatisation in 1803. Nevertheless, the Austrian Circle was dissolved when Emperor Francis II resigned on 6 August 1806.

The circle was made up of the following states: