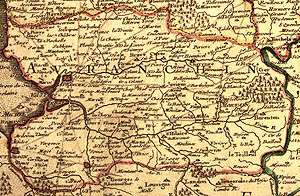 The Avranchin is an area in Normandy, France corresponding to the territory of the Abrincatui, a tribe of Celts from whom the city of Avranches, the main town of the Avranchin, takes its name.

In 867, by the Treaty of Compiègne, Charles the Bald gave the Avranchin to Salomon, King of Brittany. In 933 it was reunited with the Duchy of Normandy by William I of Normandy.

This article is issued from Wikipedia - version of the 1/21/2016. The text is available under the Creative Commons Attribution/Share Alike but additional terms may apply for the media files.