Not to be confused with the film Avvaiyar (film). 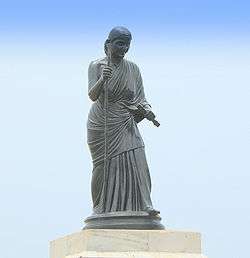 The Avvaiyars (Tamil: ஔவையார்; 'Respectable Women') was the title of more than one poet who was active during different periods of Tamil literature. The Avvaiyar were some of the most famous and important female poets of the Tamil canon. Abithana Chintamani states that there were three female poets titled Avvaiyar.

Among them, Avvaiyar lived during the Sangam period (c. 1st and 2nd century CE) and had cordial relation with the Tamil chieftains Vēl Pāri and Athiyamān. She wrote 59 poems in the Puṟanāṉūṟu.[1]

Avvaiyar II lived during the period of Kambar and Ottakoothar during the reign of the Chola dynasty in the 10th century. She is often imagined as an old and intelligent lady by Tamil people. She wrote many of the poems that remain very popular even now and are inculcated in school textbooks in Tamil Nadu. These books include a list of dos and don'ts, useful for daily life, arranged in simple and short sentences.

There is a very famous legend that is associated with Avvaiyar (Tamil: ஔவையார்), a prominent female poets/ethicist/political activist of Sangam period (Tamil literature), and Naaval Pazham (Jambu) in Tamil Nadu. Avvaiyar, believing to have achieved everything that is to be achieved, is said to have been pondering her retirement from Tamil literary work while resting under Naaval Pazham tree. But she is met with and was wittily jousted by a disguised Murugan (regarded as one of the guardian deities of the Tamil language), who later revealed himself and made her realise that there was still a lot more to be done and learnt. Following this awakening, Avvaiyar is believed to have undertaken a fresh set of literary works, targeted at children. These works, even after a millennium, are often among the very first literature that children are exposed to in Tamil Nadu schools.

The name Avvaiyar is a combination of Tamil word av vai with honorific suffix ar.[2] Avvai refers to respectable elderly woman as the word ammai which means good woman in general term for a woman of any age.[2] Thus the name Avvaiyar means a respectable good woman hence a generic title rather than a specific name of a person. [3]

The Avvaiyar who lived during the Sangam period is considered to be contemporary to poets Paranar,[2] Kabilar and Thiruvalluvar.[4] She is attributed as the author of 7 verses in Naṟṟiṇai, 15 in Kuṟuntokai, 4 in Akanaṉūṟu and 33 in Puṟanāṉūṟu.[2] Legend states that she was a court poet of the rulers of the Tamil country. She travelled from one part of the country to another and from one village to another, sharing the gruel of the poor farmers and composing songs for their enjoyment. Most of her songs were about a small-time chieftain Vallal Athiyamaan Nedumaan Anji and his family.[2] The chieftain had also used her as his ambassador to avert war with another neighbouring chieftain Thondaiman.[2] The rest of her songs related to the various aspects of state governance. Although traditions claim that she was a sister of Kabilar, Thiruvalluvar and Athiyamaan, V. R. Ramachandra Dikshitar refutes this claim based on his studies that all four of them were most likely of different walks of life, thus from different caste backgrounds and hence impossible to be siblings. Tirukkovilur is an ancient temple town in Tamil Nadu. This is where the demon andhaka was killed by lord Shiva. Sangam epics recount that it was here that avvayar was blessed with a vision of her lord slaying andhaka and she has dedicated verses to the same. At great ancient temple of thillai chidambaram she sang vinayakar tiruakaval when lord Ganesha displayed his dancing form to her.Vinayakar Toruakaval is an extremely esoteric work. [4]

The medieval period Avvaiyar was the court poet of the Chola monarch and was the contemporary of Kambar and Ottakkuttar.[2] She found great happiness in the life of small children. Her works, Ātticcūṭi and Konraiventhan, written for young children, are even now generally read and enjoyed by them.

Her two other works, Mooturai and Nalvali were written for older children. All the four works are didactic in character – they explain the basic wisdom that should govern mundane life.

The following quotes from Aathichoodi illustrate the simplicity of her style and profoundness of the messages:

"Nandri Oruvarukku Seithakkal An Nandri Endru tharum kol ena vaenda nindru Thalara valar thengu Thaalunda Neerai Thalaiyaalae Thaan Tharuthalal" -Don't wait for a return benefit as to when a good deed done will pay back, but be just like that tall and erect coconut tree that drank water from its feet gives the benefit of giving that sweet water by its head."

Her quote "கற்றது கைமண் அளவு, கல்லாதது உலகளவு" has been translated as "What you have learned is a mere handful; What you haven't learned is the size of the world" and exhibited at NASA.[5] Her famous works include:

In Muppandal, a small village in the Kanyakumari District of Tamil Nadu. there is an image of Avvaiyar. By tradition, this is stated to be the spot where the great poet left the mortal world.[6]

Annual Avvai Vizha is organised & conducted by Government of Tamil Nadu to commemorate Avvaiyar's contribution to Tamil literature. This festival is celebrated every year in the month of Panguni on Sadhayam star day. Avvai Vizha has been started by local community long time back and still continuing willingly. Now Govt of Tamil Nadu is continuing this function and adding more values. Local community, Tamil scholars and scholars from various fields participating with passion on this occasion and deliver their speech. Avvai Vizha is conducted in the temple Avvayar situated at Thulasiyappattinam village, Vedaranyam, Nagappatinam District, in the temple premises of Arulmigu Visvanathaswamy Thirukovil. Also this place is referred to famous interaction between Lord Muruga & Avvaiyar "Suttapazham Venduma Sudatha Pazham Venduma". This temple is under the control of the Hindu Religious and Charitable Endowments Department.

Legend has it that once the great king Athiyaman gave an eternal gooseberryNellikani fruit to Avvaiyar. This is a special and powerful fruit; whoever eats it will have a healthy and long life. Athiyaman wanted Avvaiyar to eat the eternal fruit as she was the right person who could serve the Tamil community. If she could live forever, so would the Tamil heritage and language.[7]

Publication in the US

In 2009, Red Hen Press published a selection of Avvaiyar's poetry from the 12th century, entitled Give, Eat, and Live: Poems by Avviyar. The poems were selected and translated into English by Thomas Pruiksma,[8] a poet and translator who discovered Avviyar's work while on a Fulbright scholarship at The American College in Madurai, Tamil Nadu, India.