BBC News Online is the website of BBC News, the division of the BBC responsible for newsgathering and production. The website is the most frequently accessed news website in the United Kingdom, and forms a major part of BBC Online (bbc.co.uk), which records around 70 million unique users a week (around 60 to 70% of visitors are from the UK).[2][3]

The website contains international news coverage, as well as British, entertainment, science, and political news. Many reports are accompanied by audio and video from the BBC's television and radio news services, while the latest TV and radio bulletins are also available to view or listen to on the site together with other current affairs programmes.

BBC News Online is closely linked to its sister department website, that of BBC Sport. Both sites follow similar layout and content options and respective journalists work alongside each other. Location information provided by users is also shared with the website of BBC Weather to provide local content.

From 1998 to 2001 the site was named best news website at the BAFTA Interactive Entertainment Awards when the award category was withdrawn. It has previously won both the Judges' award and the People's Voice award for best news site at the annual Webby Awards.[4] 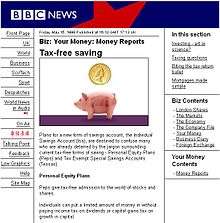 The BBC had previously created special websites marking the 1995 Budget, the 1997 general election, and the death of Princess Diana in 1997, but nothing on the scale of the launch of the main site itself,[5] which required the development of a completely new production system, for which a team, led by Matthew Karas[6] was specially hired.[7]

The original design was created by a team, including Matt Jones, based on designs commissioned from consultancy Lambie-Nairn, and has been redesigned several times mainly to match the visual style of BBC News television bulletins and to exploit increases in readers' typical screen resolutions. A major overhaul in 2003, primarily by Paul Sissons and Maire Flynn, coincided with a relaunch of the BBC News Channel (then BBC News 24) and featured a wider page design. The site launched a set of semi-official RSS 0.91 syndication feeds in June 2003 and upgraded them to full feed RSS 2.0 in 2008.[8] Each news index has its own RSS feed, including the in-depth sections.

In 2004 the BBC News website partnered with Moreover Technologies, in a response to the 2003 Graf Report, to provide links from BBC articles to rival publishers.[9] Whilst the BBC does not censor or change results the algorithms used tend to give greater weight to national and international sources over regional or local ones.

Mike Smartt, who became editor in chief in 2000, was later succeeded by Pete Clifton who was subsequently promoted to Head of BBC News Interactive and replaced by the previous editor Steve Herrmann in 2005.[10] 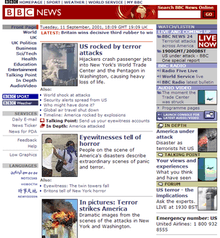 A restructuring of BBC News starting in 2007 saw the dissolution of the separate BBC News Interactive department; the editorial and management departments joined the new multimedia newsroom along with television and radio news within BBC Television Centre.[11]

New features were gradually introduced, including the publicising of video content more prominently, and the introduction of live streaming of the BBC News channel. In line with the introduction of new features across BBC Online, including a new navigation bar, the site was updated in 2008 with wider centred page designs, larger images and an increased emphasis on audio and visual content.[12]

Beginning on 30 April 2009, some published stories included in-text links, mostly to in-site profile articles on people, locations and organisations. The BBC announced on 19 November 2009 that it was to pay more attention to search engine optimisation by extending news headlines.[13][14]

On 14 July 2010 the site was completely redesigned, with the vertical section headings moved to run horizontally near the top of the page. The new design, incorporating larger in-line videos within news articles and standardised font usage, was introduced as a first step to bringing the entire BBC website into line with its new style guidelines.[15] It was met with mixed opinions; Stephen Fry stated his approval of the redesign,[16] and the new design was praised for being "more attractive [and] graphically stronger".[17] However, there was also criticism, with some stating that the use of white space was too widespread and led to the need for continuous and excessive scrolling.[17]

On 4 March 2014, the BBC launched a beta version of the website which was built around the principles of responsive web design, allowing the presentation of content to adjust automatically for a wide variety of screen sizes, from desktop computer to smartphones and tablet devices.[18] The new design went live on 23 March 2015.[19]

There are two different editions of the site: a UK edition, which gives prominence to UK stories, and an international edition, which prioritises international news. Internet users with IP addresses originating from the UK are served the UK edition, all others receive the international edition. The international version contains advertising and an "Advertise With Us" link at the bottom.[20] All articles are archived indefinitely and can be retrieved via searching or by browsing the extensive Special Reports section, which contains collections of articles relating to major news stories. The previous seven days' top stories were formerly available through the Week at a Glance section of the website. As well as pure news articles, the site also contains material to support BBC news, current affairs and factual programmes.

A forum, Have Your Say, is also a major part of the site, and comment sections are activated on selected articles. The current system behind the forum was introduced in 2005 to allow or comments to be added to debates and appear in real-time, subject to varying levels of moderation.

The BBC News channel has been streamed live on the UK version of the website since 8 May 2007.[21]

BBC News Online uses a blog-style system for correspondents to write articles within their specialism. Journalists including Nick Robinson, Robert Peston and Kamal Ahmed use blogs to provide updates on current events and topics. Editors also provide entries within the "Editors' blog", giving explanations for editorial decisions as well as announcing new features or services. Members of the public are also given the opportunity to comment on entries from journalists and editors.

Prior to the adoption of the blog-style, BBC News Online also had a number of topic-specific columns written by BBC journalists, such as former education correspondent Mike Baker's Mike Baker Weekly, and technology commentator Bill Thompson's bill board (formerly bill blog). BBC News Online Science Writer Ivan Noble, diagnosed with a malignant brain tumour in August 2002, shared his experiences of cancer in Tumour Diary until his death on 31 January 2005.

The 'Magazine' is a section of BBC News Online that includes a number of articles that are not tied to a particular event or topic, unlike the other articles on the site. The editor is Jonathan Duffy, who took over from Giles Wilson in April 2006.

A major part of the magazine is the "Magazine Monitor" column, which takes an irreverent view on the day's news. It usually includes the "Paper Monitor", which provides a commentary on the daily press in the United Kingdom. During the day a series of caption competitions and oddities are added. On weekday evenings at around 5p.m. GMT, letters from readers, both serious and light-hearted, are published. Topics can be varied: comments on news stories; how to measure sizes in terms of London Routemaster buses, or for larger geographical areas, Wales; spotting people mentioned in news stories whose name is particularly appropriate for their job, etc. Other favourite areas of discussion include the Flexicon, the gender of Paper Monitor or coming up with sardonic comments about previous letters.

On Friday evenings, ready for Saturday morning, an article called "10 things we didn't know last week" collates odd and interesting facts from the week's news. Readers are encouraged to send their own images depicting ten objects to accompany the facts; past examples have included 10 swans flying in formation and ten toes.

Since a redesign of the BBC News Online in September 2006, the Magazine Monitor has followed a blog-style layout, rather than as a page updated over the week in a similar way to news articles. Comments are allowed, but not published, other than a selection in the daily letters.

On This Day is the name of the BBC's news archive website. It contains an online digital library of news stories reported by the BBC on the Second World War and world events from the 1950s to 2005. There are entries for every day of the year, many including video or audio reports which can be viewed online. The stories are arranged by years, by themes, by witness accounts and by the correspondents reporting the stories. There is also a front page which updates daily with past events from that date.

The launch of the BBC iPlayer, with the new Adobe Flash based BBC Embedded Media Player in July 2007[22] enabled BBC News and Sport Online to change the way it presented video content. Previously the site had delivered online video content using embedded RealPlayer video in pop-up windows branded as the BBC News Player. From March 2008 the BBC began to gradually introduce embedded video using the EMP into individual news articles and onto the front page.[23] The news player also provides constant live streaming of the BBC News channel via the website.[24] This had previously only been viewable in a separate window.

Mobile and text only versions

Previously, in addition to the standard website with embedded video and audio, there was an XHTML version optimised for users on mobile devices.[25] Additionally the WAP[26] version of the website is automatically updated with news, and a text-only version of the main news website can be accessed via the BBC Betsie service.[27]

BBC News also runs a mobile app, available on the Android, iOS and Windows Phone systems. The app launched in 2010, originally for the iPhone and iPad,[28] followed by other providers. In January 2015, it was redesigned to include the option to play video and further links within articles to others.[29]

As of 23 March 2015, separate mobile and text only versions have been removed, and replaced with a 'responsive web design', allowing the presentation of content to adjust automatically for a wide variety of screen sizes, from desktop computer to smartphones and tablet devices.

The site is primarily funded by the television licence, paid by all UK households owning a television set, and used to carry no advertising. The World edition has received some subsidy from the UK's Foreign and Commonwealth Office through its grant-in-aid to the BBC World Service. This has led to complaints of unfair competition from commercial rivals. Others note that large numbers of international visitors enjoy the site at the expense of the UK public, leading to suggestions that foreign users be shown advertising or charged subscription fees when accessing the site. Proposals to include advertising on the international version of the website were discussed by the BBC Trust in February 2007, but were opposed by BBC journalists, who feared it would weaken public trust in the impartiality of the BBC.[33] In October 2007, it was confirmed that the site would start to carry advertising.[34] The advertising consists of large animated banners, which has led to complaints that these make the site's content harder to read.[35]

The impartiality of the Have Your Say forums has been disputed by organisations such as News Sniffer: moderators are accused of sometimes appearing to promote their own agenda.[36]

Have Your Say received much criticism in 2009 for featuring the question "Should homosexuals face execution?". The BBC later removed it and apologised after the BBC Pride board lobbied against it and Eric Joyce, the Labour MP for Falkirk, called it "more than offensive" and "completely unacceptable".[37]