For other uses, see Bagua (disambiguation). 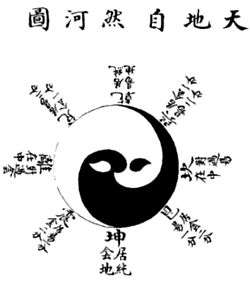 The Bagua (Chinese: 八卦; literally: "eight symbols"), or Pa Kua, are eight trigrams used in Daoist cosmology to represent the fundamental principles of reality, seen as a range of eight interrelated concepts. Each consists of three lines, each line either "broken" or "unbroken," respectively representing yin or yang. Due to their tripartite structure, they are often referred to as "trigrams" in English.

The trigrams are related to Taiji philosophy, Taijiquan and the Wu Xing, or "five elements".[1] The relationships between the trigrams are represented in two arrangements, the Primordial (先天八卦), "Earlier Heaven"[2] or "Fu Xi" bagua (伏羲八卦), and the Manifested (後天八卦), "Later Heaven,"[2] or "King Wen" bagua. The trigrams have correspondences in astronomy, astrology, geography, geomancy, anatomy, the family, and elsewhere.[3][4]

The ancient Chinese classic, I Ching (Pinyin: Yi Jing), consists of the 64 pairwise permutations of trigrams, referred to as "hexagrams", along with commentary on each one.

Relation to other principles 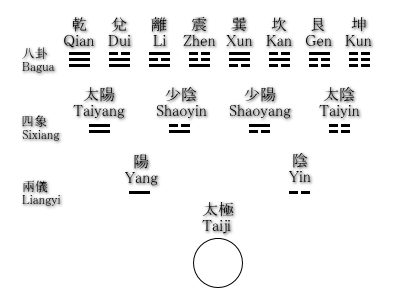 Derivation of the bagua

There are two possible sources of bagua. The first is from traditional Yin and Yang philosophy. This is explained by Fuxi in the following way:

Another possible source of bagua is the following, attributed to King Wen of Zhou Dynasty: "When the world began, there was heaven and earth. Heaven mated with the earth and gave birth to everything in the world. Heaven is Qian-gua, and the Earth is Kun-gua. The remaining six guas are their sons and daughters".

There are eight possible combinations to render the various trigrams (八卦 bāguà): 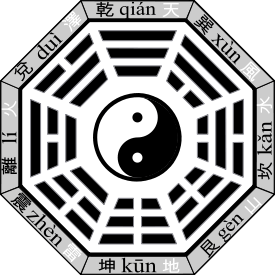 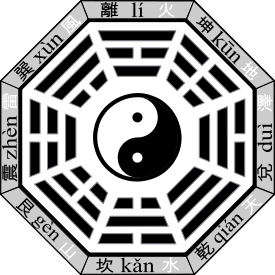 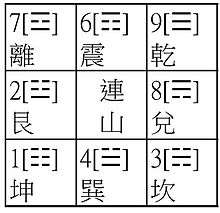 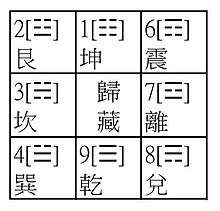 In Xiantian Bagua, also known as Fu Xi Bagua or Earlier Heaven Bagua, the Heaven is in the higher part and the Earth is in the lower part. The trigram Qian (Heaven) is at the top, the trigram Kun (Earth) is at the bottom (in the past, the South was located at the top in Chinese maps). The trigram Li (Fire) is located on the left and opposite to it is the trigram Kan (Water). Zhen (Thunder) and Xun (Wind) form another pair, while being one opposite the other, the first on the bottom left next to Li while the second is next to Qian on the top right of the Bagua. Gen (Mountain) and Dui (Lake) form the last pair, one opposite the other, both in balance and harmony. The adjustment of the trigrams is symmetrical by forming exact contrary pairs. They symbolize the opposite forces of Yin and Yang and represent an ideal state, when everything is in balance.

The sequence of the trigrams in Houtian Bagua, also known as the Bagua of King Wen or Later Heaven Bagua, describes the patterns of the environmental changes. Kan is placed downwards and Li at the top, Zhen in the East and Dui in the West. Contrary to the Earlier Heaven Bagua, this one is a dynamic Bagua where energies and the aspects of each trigram flow towards the following. It is the sequence used by the Luo Pan compass which is used in Feng Shui to analyze the movement of the Qi that affects us.

Bagua of the eight aspirations

Feng shui was made very popular in the Occident thanks to the Bagua of the eight aspirations. Each trigram corresponds to an aspect of life which, in its turn, corresponds to one of the cardinal directions. Applying feng shui using the Bagua of the eight aspirations made it possible to simplify feng shui and to bring it within the reach of everyone. The Masters of traditional feng shui call it Neo Feng Shui, for its simplicity, because it does not take into account the forms of the landscape or the temporal influence or the annual cycles. The Bagua of the eight aspirations is divided into two branches: the first, which uses the compass and cardinal directions, and the second, which uses the Bagua by using the main door. It is clear that, not taking into account the cardinal directions, the second is even more simplified.

A bagua map is a tool used in modern forms of feng shui to map a room or location and see how the different sections correspond to different aspects in one's life. These sections are believed to relate to every area or aspect of life and are divided into such categories as: fame, relationships/marriage, children/creativity, helpful people/travel, career, inner knowledge, family/ancestors/health, and wealth/blessings.

In this system, the map is intended to be used over the land, one's home, office or desk to find areas lacking good chi, and to show where there are negative or missing spaces that may need rectifying or enhancing in life or the environment.

For example, if the bagua grid is placed over the entire house plan and it shows the toilet, bathroom, laundry, or kitchen in the wealth/blessings area it would be considered that the money coming into that particular environment would disappear very fast, as if to be 'going down the drain.' 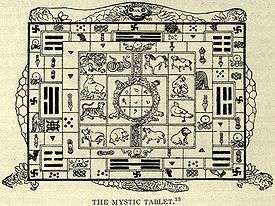 A Tibetan "Mystic Tablet" containing the Eight Trigrams on top of a large tortoise (presumably, alluding to the animal that presented them to Fu Xi), along with the 12 signs of Chinese zodiac, and a smaller tortoise carrying the Lo Shu Square on its shell