The economy of Bangladesh is largely dependent on agriculture. However, the Ready Made Garments (RMG) sector has emerged as the biggest earner of foreign currency. In 1972, the World Bank approximated the gross domestic product (GDP) of Bangladesh at USD 6.29 billion, in 2014, the GDP stood at USD 173.82 billion, growing by almost 27 times in a matter of four decades.[1] Bangladesh's exports industry alone comprised USD 31.2 billion in FY 2014-15, 81.69% of which was made up by ready-made garments. On its own, the knitwear sector encompasses 39.83% of total exports—a staggering USD 12.43 billion.[1] The RMG sector has experienced an exponential growth since the 1980s.[2] The sector contributes significantly to the GDP. It also provides employment to around 4.2 million Bangladeshis, mainly women from low income families. 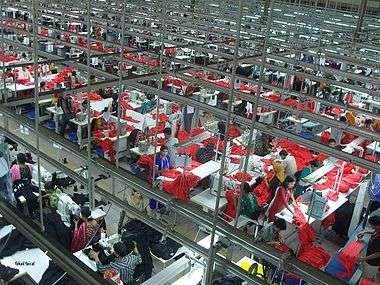 1950 was the beginning of RMG in the Western world. In order to control the level of imported RMG products from developing countries into developed countries, the Multi Fibre Agreement (MFA) was made in 1974. The MFA agreement imposed an export rate 6 percent increase every year from a developing country to a developed country. In the early 1980s Bangladesh started receiving investment in the RMG sector. Some Bangladeshis received free training from the Korean Company Daewoo. After these workers came back to Bangladesh, many of them broke ties with the factory they were working for and started their own.

In the 1980s, there were only 50 factories employing only a few thousand people. Currently, there are 4296[3] manufacturing units. Owing to the emergence of strong backward linkages within the country, the Knitwear Industry is adding up to 75% value,[1] which opens up enormous potential for foreign and domestic investors to spend in the areas of spinning, weaving, sewing, packaging, and accessories manufacturing. In the last five consecutive fiscal years, knitwear constituted 7.2% of the national GDP on average, demonstrating that RMG continues to serve as a strategic and commercially beneficial sector to the country, which has had to overcome hurdles to compete in the changing international climate time and time again. This sector also contributes around 13 percent to the GDP, which was only around 3 percent in 1991. Of the estimated 4[3] million people employed in this sector, about 50 percent of them are women from rural areas. In 2000, the industry consisting of some 3000 factories employed directly more than 1.5 million workers of whom almost 80% were female. USA is the largest importer of Bangladeshi RMG products, followed by Germany, UK, France and other E.U countries.[4]

Women in the garment industry

The garment sector is the largest employer of women in Bangladesh.[5] The garment sector has provided employment opportunities to women from the rural areas that previously did not have any opportunity to be part of the formal workforce. This has given women the chance to be financially independent and have a voice in the family because now they contribute financially.[6]

However, women workers face problems. Most women come from low income families. Low wage of women workers and their compliance have enabled the industry to compete with the world market. Women are paid far less than men mainly due to their lack of education.[7] Women are reluctant to unionize because factory owners threaten to fire them.[5] Even though trade unionization is banned inside the Export processing Zones (EPZ), the working environment is better than that of the majority of garment factories that operate outside the EPZs. But, pressure from buyers to abide by labor codes has enabled factories to maintain satisfactory working conditions.[6]

Garment workers have protested against their low wages. The firsts protests broke out in 2006, and since then, there have been periodic protests by the workers.[8] This has forced the government to increase minimum wages of workers.[9]

Wages & efficiency in the garment industry

Because the country's labor wage is very cheap, buyers are interested in the garments sector of Bangladesh.[10] A comparison by Institute for Global Labour and Human Rights shows that the labour cost to make a Denim Shirt is $0.22 in Bangladesh whereas it is $7.47 in USA.[11]

The RMG sector is expected to grow despite the global financial crisis of 2009.[9] As China is finding it challenging to make textile and foot wear items at cheap price, due to rising labor costs, many foreign investors, are coming to Bangladesh to take advantage of the low labor cost. Local accessories are being made including zippers, buttons, labels, hooks, hangers, elastic bands, thread, backboards, butterfly pins, clips, collar stays, collarbones and cartons.

The accessory market is dominated by multinational companies operating in Bangladesh, because in the majority of cases, garment buyers prefer accessories from them over the locally available items.

Five deadly incidents from November 2012 through May 2013 brought worker safety and labor violations in Bangladesh to world attention putting pressure on big global clothing brands such as Primark, Loblaw, Joe Fresh, Gap, Walmart, Nike, Tchibo, Calvin Klein and Tommy Hilfiger, and retailers to respond by using their economic weight to create change.[12] No factory owner has ever been prosecuted over the deaths of workers.[13] Other major fires 1990 and 2012, resulted in hundreds of accidental deaths, include those at That's It Sportswear Limited and the fire at Tazreen Fashions Ltd. Spectrum Sweater Industries, Phoenix Garments, Smart Export Garments, Garib and Garib, Matrix Sweater, KTS Composite Textile Mills and Sun Knitting. Foreign buyers looking for outsourcing demanded compliance-related norms and standards regarding a safe and healthy work environment which includes fire-fighting equipment and evacuation protocols. RMG insiders in Bangladesh complain about the pressure to comply and argue that RMG factory owners are hampered by a shortage of space in their rental units. In spite of this the industry exports totaled $19 billion in 2011-2012. They expected export earnings to increase to $23 billion in 2012-2013.[14]

Scott Nova of the Worker Rights Consortium, a rights advocacy group, claimed that auditors, some of whom were paid by the factories they inspect, sometimes investigated workers right issues such as hours or child labour but did not properly inspect factories’ structural soundness or fire safety violations. Nova argued that the cost of compliance to safety standards in all 5,000 clothing factories in Bangladesh is about $3 billion (2013).[12]

In year 2000 a book said that garment entrepreneurs had a reputation for shirking custom duties, evading corporate taxes, remaining absent in capital markets, avoiding social projects such as education, healthcare, and disaster relief but, argued authors Quddus and Salim, these entrepreneurs took the risks needed to build the industry.[15] Bangladesh successfully competes in the manufacturing industry by maintaining "lowest labor costs in the world." Garment workers' minimum wage was set at roughly $37 a month in 2012 but since 2010 Bangladesh's double-digit inflation with no corresponding rise in minimum wage and labor rights, has led to protests.[16]

A fire broke out on 24 November 2012, in the Tazreen Fashion factory in Dhaka[17] killing 117 people and injuring 200.[18] It was the deadliest factory fire in the history of Bangladesh.[19] According to the New York Times, Walmart played a significant role in blocking reforms to have retailers pay more for apparel in order to help Bangladesh factories improve safety standards. Walmart director of ethical sourcing, Sridevi Kalavakolanu, asserted that the company would not agree to pay the higher cost, as such improvements in electrical and fire safety in the 4,500 factories would be a "very extensive and costly modification" and that "it is not financially feasible for the brands to make such investments."[20]

On April 24, 1137 textile workers making clothes for Western brands, were killed when a garment factory collapsed. The Savar building collapse was in the Rana Plaza complex, in Savar, an industrial corner 20 miles northwest of Dhaka, the capital of Bangladesh. It was the "world's deadliest industrial accident since the Bhopal disaster in India in 1984.[21] While some 2,500 were rescued from the rubble including many who were injured, the total number of those missing remained unknown weeks later.[21] The eight-story building, owned by Sohel Rana, associated with the ruling Awami League, was constructed on a "pond filled with sand". It only had planning approval for five floors.[22] Owners used "shoddy building materials, including substandard rods, bricks and cement, and did not obtaining the necessary clearances."[21] An engineer raised safety concerns after noticing cracks in the Rana Plaza complex the day before its collapse. In spite of this factories stayed open to fill overdue orders. When generators were restarted after a power blackout the building caved in.[13][23] Six garment factories also in Rana Plaze were cleared to re-open on May 9, 2013 after inspectors allegedly issued safety certificates. Nine people were arrested including four factory owners, the owner of the complex and the engineer who warned of the crack in the building.[13]

Immediately following the April 24 deadly industrial accident, Mahbub Ahmed, the top civil servant in Bangladesh's Commerce Ministry, fearing the loss of contracts that represent 60 per cent of their textile industry exports, pleaded with the EU to not take tough, punitive measures or "impose any harsh trade conditions" on Bangladesh to "improve worker safety standards" that would hurt the "economically crucial textile industry" and lead to the loss of millions of jobs.[13]

On May 9, 2013 eight people were killed when a fire broke out at a textile factory in an eleven-story building in the Mirpur industrial district owned by Tung Hai Group, a large garment exporter. Mohammad Atiqul Islam, president of the politically powerful textile industry lobby group, the Bangladesh Garment Manufacturers and Exporters Association (BGMEA), told Reuters that "the Bangladeshi managing director of the company and a senior police officer were among the dead."[21]

On August 31, 2015 Bangladesh government has proposed a new law - the Textile Industries Establishment Act-2015 to crack down on illegal units and streamline the ready-made garment (RMG) sector. The law aims to make the Directorate of Textile an effective ‘sponsoring authority’ for the RMG sector. According to the draft proposal, none would establish and run textiles and garments factories without registration under the textile industries establishment act.[24]