Bath School of Art and Design

Bath School of Art and Design is an art college in Bath, England. It forms part of the Bath Spa University whose main campus is located a few miles from the City at Newton Park, near Corston, Somerset.

The school was founded as Bath School of Art in 1852 following The Great Exhibition of 1851.[1] The Bath Directory for 1856 shows its location at Weymouth House (roughly the rear of the present Marks and Spencers store) and its Master as Anthony Carey Stannus, an Irish painter noted for marine scenes and who later helped establish a society which evolved into the Royal Ulster Academy.[2] By the 1858 edition he had been succeeded by John J. Drummond, who by 1860 had set up his own Mr Drummond's School of Art at 3 Bladud Buildings, and later (1862) at 5 Princes Buildings almost opposite.[3]

The original School moved to Hetling House, Westgate Buildings, an ancient building which George Newenham Wright in his Historic Guide to Bath (1864) says had been garrisoned for the Royalists in the Civil War, adding that "the School of Design now occupies the principal and older part".[4] The Master for a few years was John Hill, who later continued as a private tutor and artist at his home in Combe Down until about 1884. The School's syllabus was "in connection with Marlborough House", which meant the Government School of Design and Practical Art.[5] 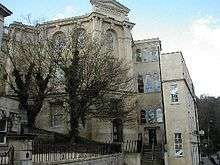 The Star Inn and Walcot School

By 1866 the School was at 33 Paragon, opposite The Star Inn, and the Master was Robert Campbell Puckett, PhD, whose 1871 work "Sciography, or radial projection of shadows" was published by Chapman & Hall of London. The tuition fee was one guinea per quarter according to the school's prospectus published as a one-page advertisement in the annual Directories. Courses were "in connection with the Science and Art Department, South Kensington". A branch was opened at The Corridor for evening classes. Later Head Masters were William Harbutt (1874), the inventor of Plasticine, John Charles Swallow (1878), and Charles M. Hodges (1880). By 1884 William Harbutt was teaching at The Paragon Art Studio, 15 Bladud Buildings.[6]

By 1894 the School had come under the umbrella of the Bath Technical Schools[7] and in April 1896 these occupied the new north extension of the Guildhall, including the retitled School of Art, Art Crafts and Design.[8] The new Head Art Master was Frank Griffin ARCA who had won bronze and silver medals, replaced by Nathaniel Heard ARCA by 1906. By 1912 the Master was Henry Wilkinson ARCA who had been taught by Ruskin and whose son (also Henry) became a well-known engraver. Successors were D.S. (probably Douglas) Andrews ARCA (1920) and Arthur Payne ARCA (1922).

The Technical Schools evolved into the Municipal Bath Technical College[9] which moved to the building in Beau Street vacated by the Royal United Hospital when it moved to Combe Park.[10][11] The process was overseen by the new head art master, the artist Paul Fripp (1934–37).[12] Then came the important appointment of the long serving Clifford Ellis (1937–1972).[13] The School of Art moved to 7 and 8 Green Park early in World War II, when the Beau Street building was taken over by the Admiralty. This new home was totally destroyed by bombs in April 1942, and temporary refuge was found at the home of the artist Walter Sickert at Bathampton. Sickert had been a part-time teacher at the School but had died in January 1942.[14] Clifford Ellis is said to have cut the lettering on Sickert's headstone.

In November 1942 the School began its association with 99 Sydney Place. A note in the local history section of Bath Central Library[15] records the opening of the new premises by Sir Kenneth Clark, then Director of the National Gallery and Surveyor of the King's Pictures.[13] After the war the process began of transforming into Bath Academy of Art-based mainly at Corsham Court, Corsham, and with an initial emphasis on training teachers of art.[1] The nascent City of Bath Training College was first based in another house at Sydney Place before its move to Newton Park, meaning that by 1947 (along with Bath College of Domestic Science then still at Brougham Hayes) all the major components of the future Bath Spa University were now in existence.

The 1983/4 prospectus contained a short history stating that from 1946 the Academy ran two courses at Corsham, one for teacher training and the other a National Diploma in Design with a small intake, with interaction between the two being seen as a particular asset. The Robbins report of 1963 led to more standardised teacher training provision, and the Academy's course was phased out by 1968. The introduction of Art Foundation courses from 1963 onwards led the Academy to begin such a course, based at the Sydney Place site which had been retained for part-time classes for the general public. In 1974 control of the institution passed to the new Avon County Council and from 1 September 1983 the Academy became part of Bath College of Higher Education.

In 1985/6 the Art and Design courses, now of bachelor's degree status, began the process of moving from Corsham to newly converted premises at Sion Hill, Bath, largely vacated by the switch of Home Economics and related courses to new premises at Newton Park.