A beauty pageant or beauty contest is a competition that has traditionally focused on judging and ranking the physical attributes of the contestants, although some contests have evolved to also incorporate personality traits, intelligence, talent, and answers to judges' questions as judged criteria. The term almost invariably refers only to contests for unmarried women such as the Big Four international beauty pageants;[1][2][3] with similar events for men or boys being called by other names and are more likely to be bodybuilding contests.

The organisers of each pageant may determine the rules of the competition, including the age range of contestants. The rules may also require the contestants to be unmarried, and be "virtuous", "amateur", and available for promotions, besides other criteria. It may also set the clothing standards in which contestants will be judged, including the type of swimsuit.

Beauty pageants are generally multi-tiered, with local competitions feeding into the larger competitions. For example, the international pageants have hundreds or thousands of local competitions. In the United States, there is now a commercial beauty pageant industry that organizes thousands of local and regional events for all ages. A winner of a beauty contest is often called a beauty queen. Child beauty pageants mainly focus on beauty, gowns, sportswear modelling, talent, and personal interviews. Adult and teen pageants focus on makeup, hair and gowns, swimsuit modelling, and personal interviews.

Possible awards include titles, tiaras or crowns, sashes, scepters, savings bonds, scholarships, and cash prizes. However, adult and teen pageants have been moving more towards judging speaking, and many no longer contain swimsuit or talent sections. Some pageants award college scholarships, to the winner or multiple runners-up.[4]

Georgiana Seymour, Duchess of Somerset was crowned the 'Queen of Beauty' at the Eglinton Tournament of 1839, the first known beauty pageant. 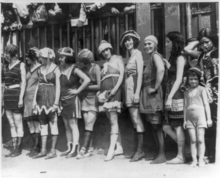 European festivals dating to the medieval era provide the most direct lineage for beauty pageants. For example, English May Day celebrations always involved the selection of a May Queen. In the United States, the May Day tradition of selecting a woman to serve as a symbol of bounty and community ideals continued, as young beautiful women participated in public celebrations.[6]

A beauty pageant was held during the Eglinton Tournament of 1839, organised by Archibald Montgomerie, 13th Earl of Eglinton, as part of a re-enactment of a medieval joust that was held in Scotland. The pageant was won by Georgiana Seymour, Duchess of Somerset, the wife of Edward Seymour, 12th Duke of Somerset, and sister of Caroline Norton, and she was proclaimed as the "Queen of Beauty".

Entrepreneur Phineas Taylor Barnum staged the first modern American pageant in 1854, but his beauty contest was closed down after public protest.[7][8]

Beauty contests became more popular in the 1880s. In 1888, the title of 'beauty queen' was awarded to an 18-year-old Creole contestant at a pageant in Spa, Belgium. All participants had to supply a photograph and a short description of themselves to be eligible to enter and a final selection of 21 was judged by a formal panel.[9] Such events were not regarded as respectable. Beauty contests came to be considered more respectable with the first modern "Miss America" contest held in 1921.

The oldest pageant still in operation today is the Miss America pageant, which was organised in 1921 by a local businessman as a means to entice tourists to Atlantic City, New Jersey.[10] The pageant hosted the winners of local newspaper beauty contests in the "Inter-City Beauty" Contest, which was attended by over one hundred thousand people. Sixteen-year-old Margaret Gorman of Washington, D.C. was crowned Miss America 1921, having won both the popularity and beauty contests, and was awarded $100.[11]

In May 1920, promoter C.E. Barfield of Galveston, Texas organized a new event known as "Splash Day" on the island. The event featured a "Bathing Girl Revue" competition as the centerpiece of its attractions.[12][13][14][15] The event was the kick-off of the summer tourist season in the city and was carried forward annually. The event quickly became known outside of Texas and, beginning in 1926, the world's first international contest was added, known as the International Pageant of Pulchritude.[14] This contest is said to have served as a model for modern pageants.[15][16][17] It featured contestants from England, Russia, Turkey, and many other nations and the title awarded at the time was known as "Miss Universe."[15][18] The event was discontinued in the United States in 1932 because of the Depression (the international competition was revived briefly in Belgium). 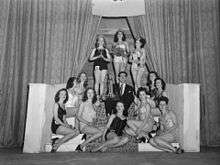 The popularity of the Miss America pageant prompted other organizations to establish similar contests in the 1950s and beyond. Some were significant while others were trivial, such as the National Donut Queen contest. The Miss World contest started in 1951, Miss Universe started in 1952 as did Miss USA. Miss International started in 1960. The Miss Black America contest started in 1968[19] in response to the exclusion of African American women from the Miss America pageant. The Miss Universe Organization started the Miss Teen USA in 1983 for the 14-19 age group, and Miss Earth started in 2001. These contests continue to this day.

The requirement for contestants to wear a swimsuit was a controversial aspect of the various competitions. The controversy was heightened with the increasing popularity of the bikini after its introduction in 1946. The bikini was banned for the Miss America contest in 1947 because of Roman Catholic protesters.[20] When the Miss World contest started in 1951, there was an outcry when the winner was crowned in a bikini. Pope Pius XII condemned the crowning as sinful,[21][22] and countries with religious traditions threatened to withdraw delegates.[23] The bikini was banned for future and other contests. It was not until the late 1990s that they became permitted again,[10] but still generated controversy when finals were held in countries where bikinis (or swimsuits in general) were socially disapproved.[10][24] For example, in 2003, Vida Samadzai from Afghanistan caused an uproar in her native country when she participated in the Miss Earth contest in a bikini.[10] In 2013, the swimsuit round of the Miss World contest was dropped because of Islamist protests in Bali (Indonesia), where the contest took place.[24] In 2014, the Miss World contest eliminated the swimsuit competition from its pageant.[25]

The panel of judges for the 1973 Miss Amsterdam pageant

Critics of beauty pageants argue that such contests reinforce the idea that girls and women should be valued primarily for their physical appearance, and that this puts tremendous pressure on women to conform to conventional beauty standards by spending time and money on fashion, cosmetics, hair styling, and even cosmetic surgery. They claim that this pursuit of physical beauty even encourages some women to go on a diet to the point of harming themselves.[32][33][34]

It is argued that rather than being empowering, beauty pageants do exactly the opposite because they deny the full humanity of women by placing them as the subject of objectification; they reinforce the idea that a woman's only purpose is to look attractive.[35]

Another criticism that is placed on beauty pageants is in the way beauty is quantifiably scored as highlighted by the "Myth of the Perfect 10".[36] Beauty becomes a numerical coefficient in ranking contestants, and this type of scoring still remains followed as a system even in nationwide beauty pageants such as Miss America.[37]