South side of the abbey, the church and the monks' cells seen from Le Bec-Hellouin

Bec Abbey, formally the Abbey of Our Lady of Bec (French: Abbaye Notre-Dame du Bec), is a Benedictine monastic foundation in the Eure département, in the Bec valley midway between the cities of Rouen and Bernay. It is located in Le Bec Hellouin, Normandy, France, and was formerly the most influential abbey of the 12th-century Anglo-Norman kingdom.[1]

Like all abbeys, Bec maintained annals of the house but uniquely its first abbots also received individual biographies, brought together by the monk of Bec, Milo Crispin. Because of the abbey's cross-Channel influence, these hagiographic lives sometimes disclose historical information of more than local importance. 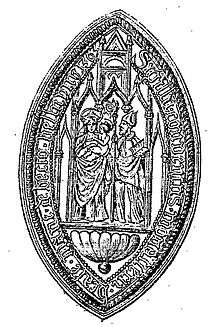 "Bec" is the name of the stream running through the abbey, Old Norse bekkr, in English place or river names Beck. 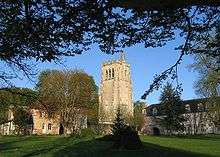 West side of the Tour Saint-Nicolas, between the ancient pottery to its left and the monks' residential building to its right

The abbey was founded in 1034 by Saint Herluin,[n 1] whose life was written by Gilbert Crispin, Abbot of Westminster, formerly of Bec, and collated with three other lives by Milo Crispin. Abbey construction began in 1034 and continued through 1035. Further lands were added through 1040.[3] a Norman knight who in about 1031 left the court of Gilbert, Count of Brionne, to devote himself to a life of religion: the commune of Le Bec Hellouin preserves his name. One hundred thirty-six monks made their profession while Herluin was in charge.[4]

With the arrival of Lanfranc of Pavia, Bec became a focus of 11th century intellectual life. Lanfranc, who was already famous for his lectures at Avranches, came to teach as prior and master of the monastic school, but left in 1062, to become abbot of St. Stephen's Abbey, Caen, and later Archbishop of Canterbury. He was followed as abbot by Anselm, also later an Archbishop of Canterbury, as was the fifth abbot, Theobald of Bec. Many distinguished ecclesiastics, probably including the future Pope Alexander II and Saint Ivo of Chartres, were educated in the school at Bec.

The life of the founder (Vita Herluini) was written by Gilbert Crispin. Archbishop Lanfranc also wrote a Chronicon Beccense of the life of Herlui. Milo Crispin's biography of the first four abbots was published at Paris in 1648.[5]

The followers of William the Conqueror supported the abbey, enriching it with extensive properties in England. Bec also owned and managed St Neots Priory as well as a number of other British foundations, including Goldcliff Priory in Monmouthshire founded in 1113 by Robert de Chandos. The village of Tooting Bec, now a London suburb, is so named because the abbey owned the land.

Bec Abbey was the original burial place of the Empress Matilda, whose bones were later transferred to Rouen Cathedral.

Bec Abbey was damaged during the Wars of Religion and left a ruin in the French Revolution but the 15th-century St. Nicholas Tower (Tour Saint-Nicolas) from the medieval monastery is still standing.[6]

In 1948 the site was re-settled as the Abbaye de Notre-Dame du Bec by Olivetan monks led by Dom Grammont, who effected some restorations. The abbey is known for its links with Anglicanism and has been visited by successive archbishops of Canterbury. The abbey library contains the John Graham Bishop deposit of 5,000 works concerning Anglicanism.

In modern day, the Abbey is best known for the pottery the monks produce.