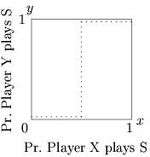 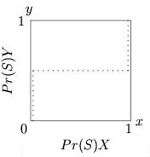 There are three distinctive reaction correspondence shapes, one for each of the three types of symmetric 2x2 games: coordination games, discoordination games and games with dominated strategies (the trivial fourth case in which payoffs are always equal for both moves is not really a game theoretical problem). Any payoff symmetric 2x2 game will take one of these three forms.

Games in which players score highest when both players choose the same strategy, such as the stag hunt and battle of the sexes are called coordination games. These games have reaction correspondences of the same shape as Figure 3, where there is one Nash equilibrium in the bottom left corner, another in the top right, and a mixing Nash somewhere along the diagonal between the other two. 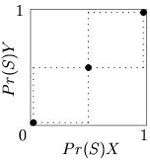 Games such as the game of chicken and hawk-dove game in which players score highest when they choose opposite strategies, i.e., discoordinate, are called anti-coordination games. They have reaction correspondences (Figure 4) that cross in the opposite direction to coordination games, with three Nash equilibria, one in each of the top left and bottom right corners, where one player chooses one strategy, the other player chooses the opposite strategy. The third Nash equilibrium is a mixed strategy which lies along the diagonal from the bottom left to top right corners. If the players do not know which one of them is which, then the mixed Nash is an evolutionarily stable strategy (ESS), as play is confined to the bottom left to top right diagonal line. Otherwise an uncorrelated asymmetry is said to exist, and the corner Nash equilibria are ESSes.

Figure 4. Reaction correspondence for both players in the hawk-dove game. Nash equilibria shown with points, where the two player's correspondences agree, i.e. cross

Figure 5. Reaction correspondence for a game with a dominated strategy.

Games with dominated strategies have reaction correspondences which only cross at one point, which will be in either the bottom left, or top right corner in payoff symmetric 2x2 games. For instance, in the single-play prisoner's dilemma, the "Cooperate" move is not optimal for any probability of opponent Cooperation. Figure 5 shows the reaction correspondence for such a game, where the dimensions are "Probability play Cooperate", the Nash equilibrium is in the lower left corner where neither player plays Cooperate. If the dimensions were defined as "Probability play Defect", then both players best response curves would be 1 for all opponent strategy probabilities and the reaction correspondences would cross (and form a Nash equilibrium) at the top right corner.

While there are only four possible types of payoff symmetric 2x2 games (of which one is trivial), the five different best response curves per player allow for a larger number of payoff asymmetric game types. Many of these are not truly different from each other. The dimensions may be redefined (exchange names of strategies 1 and 2) to produce symmetrical games which are logically identical.

One well-known game with payoff asymmetries is the matching pennies game. In this game one player, the row player — graphed on the y dimension — wins if the players coordinate (both choose heads or both choose tails) while the other player, the column player — shown in the x-axis — wins if the players discoordinate. Player Y's reaction correspondence is that of a coordination game, while that of player X is a discoordination game. The only Nash equilibrium is the combination of mixed strategies where both players independently choose heads and tails with probability 0.5 each.

Figure 7. Reaction correspondences for players in the matching pennies game. The leftmost mapping is for the coordinating player, the middle shows the mapping for the discoordinating player. The sole Nash equilibrium is shown in the right hand graph.

In evolutionary game theory, best response dynamics represents a class of strategy updating rules, where players strategies in the next round are determined by their best responses to some subset of the population. Some examples include:

In the theory of potential games, best response dynamics refers to a way of finding a Nash equilibrium by computing the best response for every player:

There are many functions that represent smoothed best response functions. The functions illustrated here are several variations on the following function:

represents the expected payoff of action

implies that the player is more likely to make 'mistakes').

There are several advantages to using smoothed best response, both theoretical and empirical. First, it is consistent with psychological experiments; when individuals are roughly indifferent between two actions they appear to choose more or less at random. Second, the play of individuals is uniquely determined in all cases, since it is a correspondence that is also a function. Finally, using smoothed best response with some learning rules (as in Fictitious play) can result in players learning to play mixed strategy Nash equilibria (Fudenberg & Levine 1998).