Beyond the Hills (Romanian: După dealuri) is a 2012 Romanian drama film directed by Cristian Mungiu, starring Cristina Flutur and Cosmina Stratan.[1] The narrative follows two young women at an Orthodox convent in Romania.[2]

The film premiered at the 2012 Cannes Film Festival, where Mungiu won the award for Best Screenplay, and Flutur and Stratan shared the award for Best Actress. It was selected as the Romanian entry for the Best Foreign Language Oscar at the 85th Academy Awards,[3] making the January shortlist.[4]

This is a story of two Romanian orphan girls, Voichița (Cosmina Stratan), who has become a nun in the Orthodox Church, and her troubled friend Alina (Cristina Flutur), who has been working in Germany but has returned home to visit her friend. In their previous life they were roommates at a children's home and had shared a physical relationship.

It soon becomes clear that Alina wishes for this relationship to continue, however Voichița refuses. Alina falls ill and is hospitalised and Voichița begs the priest (Valeriu Andriuță) to allow her to stay along with the nuns at the convent. The priest acquiesces to Voichița's demands, on the condition that she will be responsible should anything happen. He insists that Alina remain faithful to God and undertake confession for her sins.

Alina seeks to convince Voichița to break free of the Orthodox environment and come and join her in Germany. Voichița, for her part, tries to convince Alina to take God into her heart, in the hope that this will finally give her peace. The nuns agree to care for Alina, as they can find no other place for her to stay.

The screenplay was inspired by two novels by the writer Tatiana Niculescu Bran, documenting the Tanacu exorcism, in which a young member of a monastery in Moldavia died in 2005 after an exorcism ritual. The film production was made through the director's company, Mobra Films. It also received production support from Belgium and France. It received €273,100  from Romania's National Centre for Cinema and €400,000 from Eurimages. Filming took place from November 2011 to February 2012.[2] 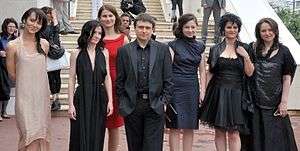 Cast and crew at the 2012 Cannes Film Festival

The film premiered in the main competition at the 2012 Cannes Film Festival, where it was screened on 19 May.[5] At Cannes, Mungiu won the award for Best Screenplay, while Cristina Flutur and Cosmina Stratan shared the award for Best Actress.[6]

Dan Fainaru of Screen Daily wrote from Cannes: "Spare, unadorned and strikingly shot, Cristian Mungiu's film is an unusual rendering of a Romanian exorcism case and is bound to split both audience and critical opinions, some considering it a major achievement and others blaming it for overlong pretentious sensationalism. But it will certainly not pass unnoticed."[7]