For the firearms manufacturer, see Beretta. 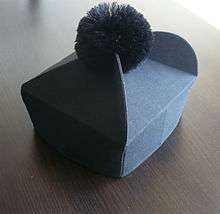 The "Spanish version" of the biretta, from The Philippi Collection

The origins of the biretta are uncertain. It is mentioned as early as the tenth century. One possible origin is the academic cap of the high Middle Ages, which was soft and square. This is also the ancestor of the modern mortarboard used today in secular universities. The biretta seems to have become a more widely used as an ecclesiastical vestment after the synod of Bergamo, 1311, ordered the clergy to wear the "bireta on their heads after the manner of laymen."[1] The tuft or pom sometimes seen on the biretta was added later; the earliest forms of the biretta did not bear the device.

The biretta is used by all ranks of the clergy from cardinals to priests, deacons and seminarians. Those worn by cardinals are scarlet red and made of silk. After the Second Vatican Council the ceremony of giving the galero to cardinals was replaced with giving the biretta. The biretta of a bishop is amaranth in color, while those worn by priests, deacons, and seminarians are black. The pope does not make use of the biretta, instead wearing the more ancient camauro, which Pope Benedict XVI has brought back into use.

Cardinals bear no tuft or "pom" (they are given their birettas and zuchettos by the Pope who elevated them in a ceremony named a consistory- they will form a line, and kneel before him when receiving them), bishops bear a purple pom, priests who have been appointed as prelates to certain positions within the Vatican wear a black biretta with red pom, diocesan priests and deacons wear a black biretta with or without a black pom. It is often asserted that seminarians are only entitled to wear a biretta without a pom-pom, but there would seem to be no formal ruling on this point. Priests in monastic and mendicant religious orders that have their own habits (Benedictines, Franciscans, Dominicans, etc.) do not generally wear birettas: in most circumstances, even liturgical, the monastic hood took the place of the biretta. Canons Regular generally do—for instance the canons of the Order of Prémontré wear a white biretta. Clerks Regular (that is, post-Renaissance religious orders primarily dedicated to priestly ministry, for instance the Jesuits and Redemptorists) generally wear a black biretta with no tuft. Other priests who belong to various forms of community life, as the Congregation of the Oratory of St. Philip Neri for instance, generally also wear birettas, but without a pom.

The liturgical biretta has three peaks (four peaks however are the norm in Germany and the Netherlands), with the "peak-less" corner worn on the left side of the head. According to the 1913 Catholic Encyclopedia, "It was formerly the rule that a priest should always wear it in giving absolution in confession, and it is probable that the ancient usage which requires an English judge assume the 'black cap' in pronouncing sentence of death is of identical origin."[2]

The use of the biretta has not been abolished as a result of changes in the regulation of clerical dress and vesture following the Second Vatican Council and still remains the correct liturgical headgear for those in Holy Orders whilst "in choir", but its use has been made optional. Its use is prevalent among bishops and cardinals, and less so among other clergy. Some priests wear it during outdoor services such as burials or processions and, as is intended, during the celebration of Mass and other liturgical services. The biretta is also worn by a priest, deacon, subdeacon, and bishop in attendance at a Mass offered according to the rubrics for the Roman Missal of 1962. 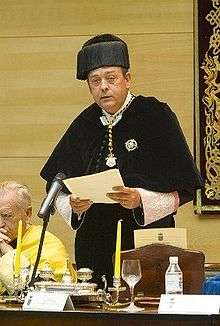 Spanish rector (college president) in full academic dress, wearing the round birrete (bireta) that is the academic cap in Spanish universities.

Use in medieval universities

In the medieval university, the ceremony by which a new master or doctor received his degree included the birretatio, or imposition of the biretta. This was often given with a token book in recognition of the person's scholarship.[3] The academic biretta developed into various styles of academic headgear on the European continent and in the British Isles. Today some secular universities still use the term, if not the actual biretta, to name their academic cap.

Use by pontifical universities

For those holding doctoral degrees from a pontifical university or faculty, whether ordained or lay, "the principal mark of a Doctor's dignity is the four horned biretta."[4] In commencement ceremonies and other academic settings, doctors of the four ecclesiastical disciplines (Philosophy, Theology, Canon Law, and Sacred Scriptures) from pontifical faculties and universities have a canonical right to wear the doctoral biretta as stated in the Codex Iuris Canonici, 1917, can. 1378, and explained in commentary 262 of the Commentarium Codicis Iuris Canonici as follows:

The color of the doctoral biretta given by ecclesiastical universities and faculties is normally black, with colored piping corresponding to the faculty of study in which the degree was granted:

At one time, different universities had different practices concerning the color and style of the biretta itself. One author, nearly a century ago, reports that in his day the Roman universities gave a doctoral biretta in black silk, Louvain gave a biretta with a colored tuft according to the academic discipline in which the doctorate was awarded, and the Catholic University of America gave a velvet biretta with red tuft and trim to doctors of theology.[6][7] The 'traditional' biretta at the Pontifical University of Saint Thomas Aquinas, Angelicum, is white, to correspond to the white Dominican habit.[8] Also, the academic senate of the Angelicum in its May 2011 meeting indicated that the black biretta may be used with trim and pom in the color of the particular faculty.[9]

A three-peaked black biretta with appropriately colored piping may be similarly used by those receiving the licentiate degree (S.T.L., Ph.L.).

Depictions in art in Catholicism

The biretta was considered as possible headwear for female barristers in England and Wales. In 1922, immediately prior to the first lady being called to the Bar, there was discussion among the senior judges about what she should wear on her head. Darling J and Horridge J suggested the biretta, but were outvoted by the other nine judges present. As a result, female barristers wear the same unpowdered men's wig as male barristers, which completely covers the hair.