Bismuth bronze or "Bismuth brass" is a copper alloy which typically contains 1-3% Bismuth by weight, although some alloys contain over 6% Bi. This bronze alloy is very corrosion-resistant, a property which makes it suitable for use in environments such as the ocean. Bismuth bronzes and brasses are more malleable, thermally conductive, and polish better than regular brasses. The most common industrial application of these metals are as bearings, however the material has been in use since the late nineteenth century as kitchenware and mirrors. Bismuth bronze was also found in ceremonial Inca knives at Machu Picchu.[1] Recently, pressure for the substitution of hazardous metals has increased and with it bismuth bronze is being marketed as a green alternative to leaded bronze bearings and bushings.

The earliest known artifact containing bismuth bronze is an Inca knife from Peru, found in 1912. Whether the alloy was chosen because of metallurgical properties which facilitated casting or because of its whiter, more lustrous finish is a matter of conjecture. It is unlikely that the inclusion of the bismuth was accidental, as was likely the case for most other early bronzes which contained bismuth, which makes this the earliest evidence of intentional addition of Bismuth to an alloy.[1] Bismuth bronze was rediscovered in the 1880s by James Webster for telegraph wires. Webster developed two bismuth-tin-bronze alloys. One alloy was developed as an early attempt at producing corrosion-resistant bronze, and was described as "hard, tough, and sonorous." Webster also indicated that this particular alloy was also well suited to piano wires. Another early Webster alloy was described as "durable and bright" and later used in kitchenware due to its luster and slow tarnishing. This particular alloy's ability to hold polish made it useful as a light reflector or mirror material as well, which it continued to be used for into the twentieth century[2][3]

In the 1990s, autoparts manufacturer Federal Mogul began developing Bismuth Bronzes as an alternative to lead-containing bronzes because of increasing pressure on the removal of lead from both consumer and industrial applications. Bismuth is a non-toxic heavy metal, and as legislation such as the EU Restriction of Hazardous Substances or the American Reduction of Lead in Drinking Water Act continue to regulate the amount of lead that can be in a product or environment, more lead-free alternative materials have been developed which maintain properties of their lead predecessors without containing Pb. Bismuth is an especially appropriate replacement for lead leaded bronze bearings because, like lead, Bi is insoluble in copper and forms similar micro-globules that mimic lead.[4]

Modern "Bismuth Bronze" is technically neither an alloy nor a bronze, but a composite material containing brass and bismuth(though some bronzes are still used). Because bismuth, like lead, is insoluble in copper, it exists as discrete micro-globules of Bi within the grain boundaries of the alloy which behave as bismuth particles. These particles deform easily within the crystal structure and across the surface of the metal to act as a low-shear solid lubricant in cases of low lubrication. Selenium is added to red copper-bismuth alloys because it strengthens properties of the bismuth of the material. Because liquid bismuth can lead to embrittlement in an alloy, care must be taken in processing and recycling of these materials.[5][6][7]

Modern bismuth bronzes on the market are developed to hold similar properties to leaded bronzes, and many of them bear nearly identical mechanical properties to common leaded alloys, such as machinability and high thermal conductivity.[8] They also have a high lubricity, which makes them ideal for outer layers in machine parts which are subject to wear such as bearings and swashplates.[9] Bismuth-tin bronze is not easily corrosive to water; preliminary bismuth is not easily oxidized.

Originally, Bismuth-tin bronze was developed for telegraph wires. However, in the late nineteenth and early twentieth century, the bronze became more commonly used in mirrors, reflectors, kitchenware, and piano wires. It fell out of common use in the first half of the twentieth century.[3]

Modern bismuth bronze alloys are marketed as a green alternative to lead, often chosen over the less expensive leaded bronzes because of environmental regulation.[10] They are found as a surface layer on automotive or mechanical components which receive heavy wear such as hydraulic piston pumps. These alloys are also commonly used in bearings or bushes in tribologic systems. Also, some bismuth-bronze plumbing fittings are manufactured. 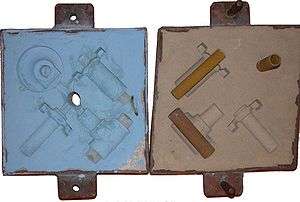 Cope & drag (top and bottom halves of a sand mold), with cores in place on the drag
Main article: Pattern (casting)

Lead-free bismuth bronze castings are produced by frozen molds. Sand characteristics are used to increase the rate of cooling of the bronze castings because the sand particles have a higher thermal conductivity, greater grain size and spherical shape. The mold has a high cooling potential. When the mold is frozen, the ice near the surface contracts to molten metal and thaws immediately.

Another way bismuth brass can be processed includes the extrusion brass rod through machining to form the material into a desired shape. The material is then annealed to relieve stress that was caused by the machining. The material is annealed at a certain annealing temperature and time depending on the material’s composition. The time is selected to limit diffusional movement of bismuth. This reduces cracking of the fixture.[11]