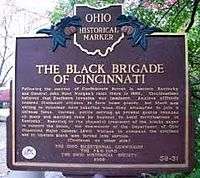 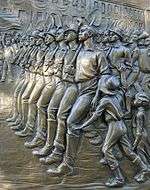 The Black Brigade of Cincinnati was a military unit that was organized, in 1862, during the American Civil War, when the city of, Cincinnati, Ohio was in danger of being attacked, by Confederate Army. The black, male population, of the Cincinnati "Black Brigade", were among the very, first, African Americans, to be employed, in the military defense of the Union.

In the early years, of the American Civil War, Ohio was a free state, where slavery was illegal. In southern Ohio, the pro-slavery city, of Cincinnati, was along the Ohio River, which bordered the Union-held, slave state, of Kentucky. On September 2, 1862, with the imminent threat, of a Confederate attack, half of, the city's white citizens, supported the forcible rounding up, many times, at gun point, from their homes, all, available, free black, adult, male citizens, by the Cincinnati police force and impressed, into temporary, forced labor, in the construction of fortifications.

Powhatan Beaty, a soldier, in the Black Brigade of Cincinnati, who enlisted in the 5th United States Colored Cavalry, promoted to first sergeant, and later awarded the Medal of Honor, for valiant, Union Army service, in Virginia

These unfortunate men, were treated like slaves, during the construction of the defensive perimeter, around Cincinnati, on the Ohio and Kentucky sides of the river. Between, the harsh, working conditions imposed, on the black conscripts and the extreme brutality, of the quasi-military, police guards, the fortifications were eventually completed. Soon after, Union Army officer, Major General Lew Wallace put Colonel William M. Dickson in charge and made sure the men finally received fair treatment, due to soldiers. The soldiers of Black Brigade, received their own military unit flag and $13 a month, Union Army private's pay. The Brigade continued to work, as a labor detail, until September 20. The Brigade had only one fatality: Joseph Johns who was killed, in an accident, on September 17, 1862. Because of the racial segregation, of the military, at that time, the city would not allow black men, to join the all, white, volunteer militia. The Black Brigade were never intended to be activated, as armed soldiers and saw no combat, during the war.

The Black Brigade of Cincinnati were never issued Union Army uniforms, during their short service, but wore the civilian clothes they had, when they were forcefully conscripted, for military labor duty.

The Black Brigade of Cincinnati was later recognized, as the first organization, of African Americans, to be used for military purposes, by the North, during the American Civil War.

On September 9, 2012, a Civil War memorial monument to the Black Brigade, created by sculptors John Hebenstreit and Carolyn Manto, was dedicated on the 150th anniversary of the 1862 defense of Cincinnati in Small Riverfront Park, in Cincinnati.