A Bloomberg terminal with a multi-monitor set-up composed of six screens.

The Bloomberg Terminal is a computer system provided by the financial data vendor Bloomberg L.P. that enables professionals in finance and other industries to access the Bloomberg Professional service through which users can monitor and analyze real-time financial market data and place trades on the electronic trading platform.[1] The system also provides news, price quotes, and messaging across its proprietary secure network.

Most large financial firms have subscriptions to the Bloomberg Professional service. Many exchanges charge their own additional fees for access to real time price feeds across the terminal. The same applies to various news organizations.

All Bloomberg Terminals are leased in two-year cycles (in the late 1990s and early 2000s, three-year contracts were an option), with leases originally based on how many displays were connected to each terminal (this predated the move to Windows-based application). Most Bloomberg setups have between two and six displays. It is available for an annual fee of $20,000 per user ($25,080 per year for the small number of firms that use only one terminal).[2] As of October 2016, there were 325,000 Bloomberg Terminal subscribers worldwide.[3]

Sales from the Bloomberg terminal account for more than 85 percent of Bloomberg L.P.'s annual revenue.[4] The financial data vendor's proprietary computer system starts at $25,080 per user per year.

The terminal implements a client-server architecture with the server running on a multiprocessor Unix platform. The client, used by end users to interact with the system, is a Windows application that typically connects directly through a router provided by Bloomberg and installed on-site. End users can also make use of an extra service (Bloomberg Anywhere) to allow the Windows application to connect via internet/IP, or Web access via a Citrix client. There are also applications that allow mobile access via Android, BlackBerry, and iOS. The server side of the terminal was originally developed using mostly the programming languages Fortran and C. Recent years have seen a transition towards C++ and embedded JavaScript on the clients and servers.

Each server machine runs multiple instances of the server process. Using a proprietary form of context-switching, the servers keep track of the state of each end user, allowing consecutive interactions from a single user to be handled by different server processes. The graphical user interface (GUI) code is also proprietary.

Michael Bloomberg's 1997 autobiography contains a chapter entitled Computers for Virgins, which explains the differences in the design of the terminal and its keyboard from the standard IBM PC keyboard layout that was popular at that time. The terminal's keyboard layout was designed for traders and market makers who had no prior computer experience. While the look and feel of the Bloomberg keyboard is very similar to the standard computer keyboard, there are several enhancements that help users navigate through the system, from the idea for a user-friendly system when originally designed in the early 1980s.

Keyboard keys are commonly referred to inside angle brackets with full commands being contained in curly brackets  e.g., {VOD LN <Equity> <GO>}. The function keys names were replaced (from the technical name, e.g., F10) and the then standard beige color, opting for a memorable color and user-friendly name, Yellow. The F10 key is thus a Yellow key named <Index>. The Esc is coloured red and named <CANCEL> in the Bloomberg system, with the red to catch one's eye to stop a task. The Enter key is referred to as <GO> with a green color, deriving from the Monopoly game board, by passing Go and collecting $200 in a hope that the user could make money on the information he would find.[5]

The Bloomberg keyboard includes a unique <MENU> key which navigates back to the previous function used. If no previous commands are found, <MENU> displays a list of related functions. Similarly, the History key will populate the command-line with previously used functions in reverse chronological order, as the Up arrow key function does in certain command prompts.

The yellow hotkeys along the top of the keyboard are used to enter market sectors, and are generally used as suffixes to allow the terminal to correctly identify a security. 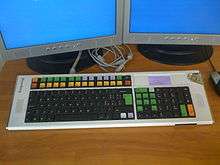 For example, if someone is interested in the Vodafone stock listed in the London market, one enters {VOD LN <Equity> <GO>} where VOD is the company's ticker, LN is the venue code for London, and <Equity> is the market sector. A detailed option list related to Vodafone UK stock will pop up, the person can then choose different options by pressing related keys or using the mouse to select the option.

Other common Bloomberg commands for Equity include:

Thus, if someone interested in the Vodafone UK stock price, they can directly type in {VOD LN <Equity> HP <GO>}.

The Bloomberg keyboard has traditionally been heavier and sturdier than standard keyboards (a previous version, the SEA100 Bloomberg keyboard weighed around 3 kg) with 3mm key travel and 19mm key pitch; it also comes with built-in speakers for multimedia features. The SEA100 version has a built-in, 500 PPI, 0.26 sq inch biometric sensor for user login verification. The current Starboard (Keyboard 4) version is 1.08 kg and uses flatter, chiclet-style keys which are quieter and have less key travel than Freeboard (Keyboard 3) and prior.

Self-contained operating system running on custom hardware—commonly referred to as a Bloomberg Box[6]—the Bloomberg Terminal now functions as an application within the Windows environment. From a user's perspective, there are essentially 3 distinct levels to the system:

Core Terminal refers to the original Bloomberg system; typically consisting of 4 windows, or Panels, each Panel contains a separate instance of the terminal command line. As the user enters tickers and functions, they can call up and display the real-time data of the market, with each different screen simultaneously running a program to analyze other tickers, functions, values and markets in real time. This use of multiple screens with user-demanded, specific pieces of differing data—across all relevant markets—allows the user to view diverse and countless volumes of information in real-time. Accessing market data, as it develops, allows the user to make trades and investments in all markets across the world, without having any lag in information. Users can run all four windows on a single monitor or spread them out amongst many monitors, maximizing the information shown on each, to effectually create up to 4 Terminals.

In February 2012, Bloomberg LP publicly announced an upgrade to the Terminal called Bloomberg NEXT. The stated goals of this multi-year, $100 million project were to improve the discoverability and usability of the Core Terminal's functionality, making it easier and more intuitive to use.[7]

Launchpad is a customizable display consisting of a number of smaller windows, called components, each dedicated to permanently displaying one set of data. A typical user would be a stockbroker who wishes to keep a list of 30 stocks visible at all times: Launchpad allows the user to create a small component which will show these prices constantly, saving the user from having to check each stock independently in the 4 terminal windows. To turn on Launchpad the command {BLP <GO>} is used, {PDFB<GO>} allows users to set Lpad to open automatically on login. Older keyboards had an <Lpad> key which replicated the {BLP<GO>} command. Other functions, such as email inboxes, calculation tools and news tickers can be similarly displayed. The Instant Bloomberg messaging/chat tool is a Launchpad component, as are the chat windows it creates. To launch a normal function from the Bloomberg Terminal's 4 Screens into launchpad type {LLP<GO>} from the target screen you wish to turn into a launchpad item.

The Bloomberg Open API (BLPAPI) application programming interface (API) allows third-party applications, such as Microsoft Excel, to access Bloomberg data via the Terminal and Bloomberg's market data products. A user might wish to use Bloomberg data from the Terminal to create their own calculations; by accessing streaming, historical, and reference market data from another program, they can build these formulae. The Bloomberg Terminal installation ships with Excel add-ins which facilitate building spreadsheets which consume market data.[8] In addition, Bloomberg offers free BLPAPI SDKs allowing Bloomberg subscribers to build their own software which accesses market data in C, C++, Java, .NET, Perl, and Python, on Windows, Linux, OS X, and Solaris.[9]

For more details on this topic, see Financial data vendor.

The largest competitor to the Bloomberg terminal is Thomson Reuters with its Reuters 3000 Xtra system, which was replaced by Eikon platform in 2010, with Bloomberg and Thomson Reuters splitting 30% each of the market share in 2011. This was a major improvement for Bloomberg as the share in 2007 was Bloomberg's 26% to Reuters' 36%.