The United States Navy occupational rating of boatswain's mate (abbreviated as BM) was a designation given by the Bureau of Naval Personnel (BUPERS) to enlisted members who were rated or "striking" for the rating as a deck seaman. The colloquial form of address for a boatswain's mate is 'Boats'.

The rating of Boatswain's Mate dates from the American Revolutionary War and was one of the oldest U.S. Navy rates in continuous existence from 1775 to 2016. On September 29, 2016 the United States Navy discontinued enlisted ratings after two hundred and forty one years of use. Service members were thereafter to be referred to solely by their rank and would hold a Navy Operations Specialty (NOS) instead of a rate.

Boatswain's mates enjoy a normal path of advancement to Chief Warrant Officer and limited duty officer.[2] Candidates must have normal color perception, and no speech impediment.[2] Candidates need not meet any special citizenship or security requirements.[2]

Boatswain's mates also stand watch on ship's bridges, passing information relating to routine and special activities to the crew with the distinctive boatswain's call or boatswain's pipe.[3] On the ancient row-galleys, the boatswain used his pipe to "call the stroke".[4] Later, because its shrill tune could be heard above most of the activity on board, it was used to signal various happenings such as pipe down, and the Side or Away Galley (the boarding or debarking of officials).[4] So essential was this signaling device to the well-being of the ship, that it became a badge of office and honor in the British and American Navies.[4]

Boatswain's mates duties cover a large spectrum and range widely depending on the capacity and mission of the vessel or shore installation to which BMs are assigned. They act as landing signalmen enlisted (LSE, guiding helicopters to the designated flight deck of a ship) on air-capable ships. They act as or supervise lookouts of Navy ships, searching the sea for enemy vessels and hazards to navigation. They conduct Search and Rescue (SAR) operations and can respond to other military and civilian ships that request assistance. Ashore, they provide armed security for either their assigned vessel or for their assigned Naval installation.

Boatswains' mates are also a source rating for the Navy's mobile amphibious community. These duties include assault boat coxswain and Craftmaster, navigating specialized assault or working vessels during amphibious operations, salvage work, or inshore work. They are also a recognized source rating for the U.S. Navy's Special Warfare and Special Operations communities. Should a Boatswain's Mate meet eligibility requirements, he can elect to become an SO (formerly SEAL), SB (formerly SWCC), an ND (Navy Diver), or EOD (Explosive Ordnance Disposal Technician). ND and EOD are currently the only special communities open to both men and women. 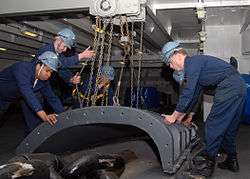 Boatswain's mates prepare for an "anchor drop test" aboard the USS George H.W. Bush to check the operability of the ship's anchor. 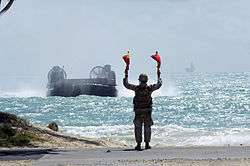 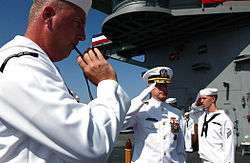 The word boatswain has been around in one form or another longer than Modern English has (Modern English only dates back to the beginning of the Renaissance).[6] It is derived from late Old English batswegen, from bat ("boat") + Old Norse sveinn ("swain"), meaning a young man, a follower, retainer or servant.[6] Various phonetic spellings (such as "bosun" and "Bos'n") have also been in use through the centuries.

Origins in the Royal Navy

The rank of boatswain was until recently the oldest active rank in Great Britain's Royal Navy,[8] and its origins can be traced back to the year 1040.[8] The Royal Navy's last official boatswain, Commander E W Andrew OBE, retired in 1990.[8]

In 1040 when five English ports began furnishing warships to King Edward the Confessor in exchange for certain privileges, they also furnished crews whose officers were the master, boatswain, carpenter and cook.[9] Later these officers were "warranted" by the British Admiralty.[9] They maintained and sailed the ships and were the standing officers of the navy.[9] Soldiers commanded by captains would be on board the ships to do the fighting, but they had nothing to do with sailing the ships.[9] The word "soldiering" came about as a seaman's term of contempt for the soldiers and anyone else who avoided shipboard duties.[9]

The warranted officers were often the permanent members of the ships' companies.[9] They stayed with the ships in port between voyages as caretakers, supervising repairs and refitting.[9] Other crewmen and soldiers might change with each voyage.[9] Early in the fourteenth Century, the purser joined the warrant officers.[9] He was originally "the clerk of burser."[9] During the following centuries the gunner, surgeon, chaplain, master-at-arms, schoolmaster and others signed on.[9]

In the Royal Navy the task of disciplining the crew fell to the quartermasters and quartermaster's mates. This was done using a rattan boatswain's cane on the boys and a rope's end on adult sailors. Punishment could lawfully be inflicted on an officer's instruction or at his own will, or more formally on deck on the captain's or a court martial's orders. Birching or use of the cat o' nine tails would have been typical in the latter case. In a large crew he could delegate this to the boatswain's mates, who might alternate after each dozen lashes.

A number of Boatswains Mates have achieved notable careers in the military. Carl Brashear, the first black American Master Diver, and whose life was the inspiration for the movie Men of Honor, retired as a master chief boatswain's mate. James E. Williams a Medal Of Honor recipient also known as the most decorated enlisted sailor in Naval history for his actions during the Vietnam War. Reuben James and William Wiley famous for their heroism in the Barbary Wars and namesakes of the ships USS Reuben James (FFG-57) and USS Wiley (DD-57) were U.S. Navy boatswain's mates.[10][11] Cesar Romero achieved the rating of Chief Boatswain's Mate aboard the Coast Guard-manned assault transport USS Cavalier. Medal of Honor recipients Francis P. Hammerberg,[12] and George Robert Cholister[13] were U.S. Navy boatswain's mates, as was Navy Cross recipient Stephen Bass.[14] USS James E. Williams (DDG-95) is an Arleigh Burke class destroyer, named for BM1 James E. Williams who was awarded the Medal of Honor while serving in the "brown-water navy" in Vietnam. In 1958 BMCM Sherman Byrd became the first African American Explosive Ordnance Disposal Technician.